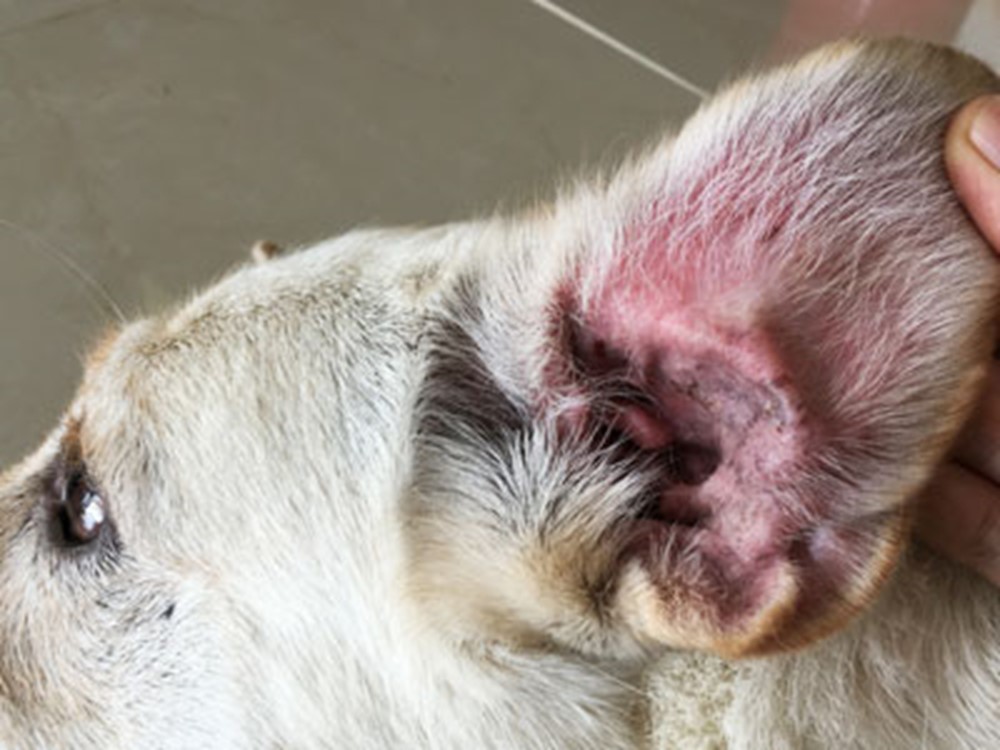 There are many diseases that can affect a dog's ear, and have a major impact on his hearing, and his health in general. Today, we will study together the specificities of the dog's ear to better understand why and how it can be affected by infections.

We will then detail the possible diseases, in order to help you to detect them to act as soon as possible, but also the treatments and food intended to maintain the best possible health in your companion!

What are the specificities of the dog's ear?

We will see in a first time the anatomy of the ear of the dog to better understand its specificities. It is composed of three parts:

• The external ear: it is formed by the pavilion which is composed of cartilage, a musculoadipeux tissue and the skin (according to the race of the dog, it is more or less mobile, more or less drawn up), of the vertical auditory canal then the horizontal auditory canal (the canal of the ear of the dog is in the shape of L) and finally the tympanic membrane.
• The middle ear: it is composed of auditory ossicles: the hammer, the anvil and the stirrup whose role is to amplify the sound waves. We also find in this part of the ear what we call the tympanic box which communicates with the pharynx by the eustachian tube.
• The internal ear: it is composed of the temporal bone, the auditory nerve, the semicircular canals which allow the balance.

Now that we know better the ear of our companion, we will see the differences with that of the man. The main difference is physiological of course.

• Dogs, unlike us, have mobile ears which allow them to perceive sounds better. But do dogs really hear better than we do? • We have all experienced a situation where our dog has heard a noise well before us (the arrival of guests for example) but in fact the dog does not hear better than us, he just hears better the high pitched sounds (the dog can perceive sounds between 40 and 60 000 hertz against 20 to 20 000 hertz for humans). Often, they make us laugh by turning their head to the right and then to the left, in fact this gesture means that they are trying to remember the sound they heard at that moment to better recognize it the next time.

Products to take care of your dog's ears

In order for our dog to keep all its hearing capacities, it is necessary to take care of it daily. To clean your dog's ears, you need to do the right things.

First, you need to buy a cleaning product for your dog's ears. Once you have the product, pull on your dog's ear to clear the ear canal, insert the product into the ear by pressing on the bottle.

Then release the ear of your dog, it will have the reflex to shake the head what will make it possible to make go up the dirt which are at the bottom (make rather that in outside).

Once he no longer shakes his head, take a piece of cotton or a compress (never a cotton swab) and collect the impurities that have gone up in the pavilion. Repeat the operation until there are no more impurities.

It is important to know that dogs with floppy ears are more prone to ear infections because the ears are not ventilated. To avoid these problems, clean your dog's ears once a week.

Recommended foods to promote the proper functioning of the dog's hearing

Indeed, some ear problems can be due to food allergies in particular. Once you are sure that the cause of his discomfort is due to food, there are foods that will be adapted to the needs of your companion.

Your veterinarian will first find out what food your pet is allergic to and then suggest a suitable diet to avoid recurrences. In the future, you should always make sure that the allergenic food is not in the kibble you buy.

This disease is due to a small parasite: a mite. This one feeds on the impurities which are located on the epidermis of the ear and the cerumen. Since it is well in this place, it will reproduce.

• The contamination: it is enough that your dog has been in contact with another animal of the same species or not carrier of this parasite for him to catch it.
• Symptoms: The main symptom will be a strong itching at the level of the ear which is translated by an animal which shakes the head unceasingly, tries to scratch the ear with the paw, will carry the ear low. Sometimes, as the animal shakes its head, an othematoma can appear. The ear will seem swollen, in fact blood vessels will burst following the shaking and a pocket of blood will form between the two walls of the ear. Sometimes a surgery will be necessary so that the blood runs out and the ear deflates. Then, we can see in case of scabies black earwax coming out of the ear, these are the eggs of the mite that itches a lot.
•Diagnosis: the veterinarian will be able to note this disease thanks to an examination of the ear using an otoscope, sometimes it will carry out a sampling using a cotton stem and will examine the taken secretions with the microscope.
• Treatment: The treatment will be local in general. It will be necessary to use ear ointments adapted to this disease and especially to clean 2 to 3 times a week with an ear cleaner. A pipette to fight against this parasite may also be necessary. As this is a very contagious disease, if you have several animals at home, it is better to treat everyone with an anti-parasitic pipette. 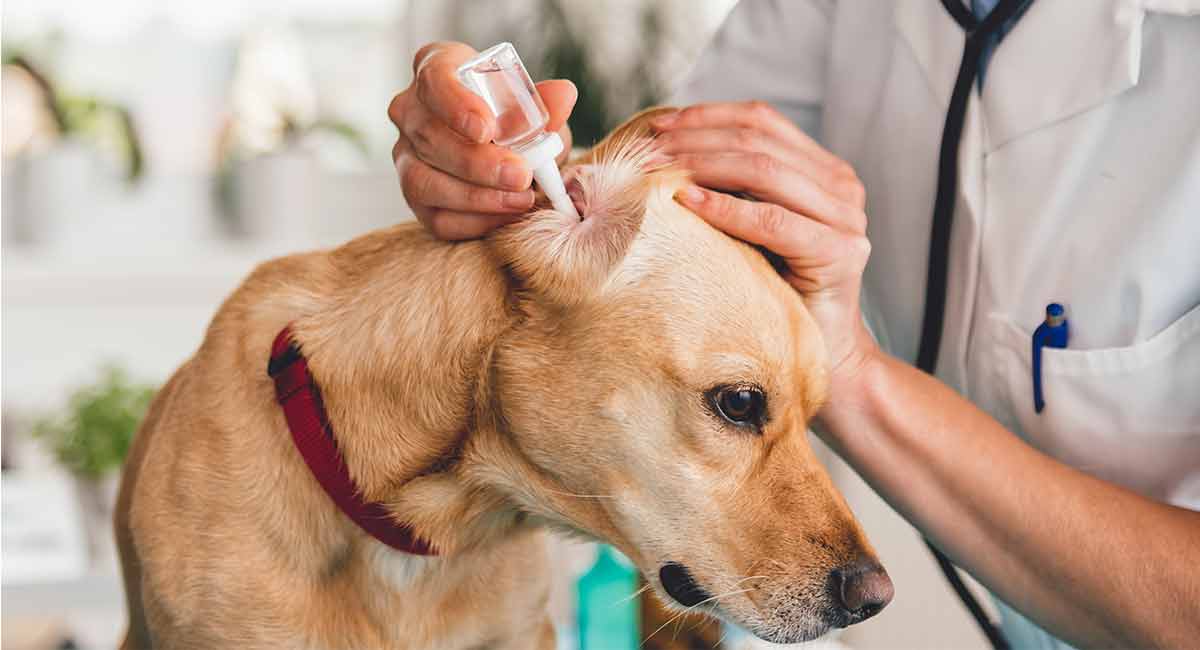 There are also several types of Otitis.

• Otitis externa: This is an inflammation of the external ear canal. This is the most common affection seen in our friends. The external auditory canal is the first exposed to microbes. The main symptoms will be itching, an animal that shakes its ears a lot, a companion that does not want you to approach and touch its ears.
• Otitis media: this affects the eardrum. Since the eardrum is at the back of the ear, no element, discharge will be visible to the naked eye but certain symptoms may put you on the alert: itching, the animal tilts or shakes its head, when the mouth is opened, pain may be observed, sneezing or discharge from the muzzle may be present.

What are the causes of ear infections? Several factors are responsible for these conditions:

• Hairballs (especially in long-haired dogs), and yes, you wouldn't think it, but hairballs can clog the ear canal and maintain a maceration that can lead to ear infections.
• Repeated swimming: some dogs love water and jump in as soon as a body of water is offered to them. The problem will be the water that stays in their ears and stagnates. It is therefore very important to clean them once a week, especially if the animal swims.
• But you should not overdo the cleaning either, which can also be responsible for ear infections if they are repeated too often. It is imperative to use an adapted product.
• Parasites as we have seen previously, especially the one called otodectes cynotis responsible for scabies.
• Foreign bodies such as spikelets often encountered in spring and summer. It is important to consult a veterinarian quickly, if after a walk during this period, you notice that your pet has a sudden discomfort and that on one side. This can probably be due to a foreign body. It is necessary in this case to act quickly, because a spikelet migrates, that is to say that it advances in the duct and can reach the eardrum. In some cases, it can even pierce the eardrum and can have serious consequences.
• Allergies can also be the cause of otitis. We can encounter problems of food or environmental allergies (pollen allergy for example).

My pet scratches its ears, what should I do?

If your pet scratches its ear, tell yourself that it is not normal. Your companion has only two ears, it is also valid for the eyes so it is necessary to take care of it. The only thing to do is to consult a veterinarian in case of scratching.