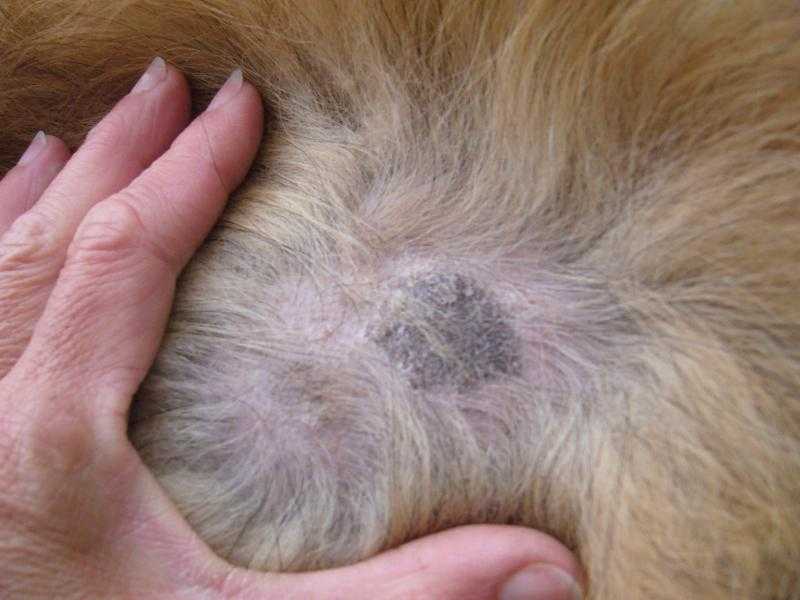 Although this pathology is benign and without danger for the dog's health, it is important to have your pet treated as soon as possible when you suspect he has it. Why? Simply because ringworm is extremely contagious and is transmitted to humans, where it causes unsightly lesions, sometimes irritating.

The name ringworm is associated with various diseases caused by microscopic fungi, the dermatophytes. Several fungi can cause dermatophytosis: Trichophytons, Microsporums and Epidermophytons. Depending on their nature, they are more or less contagious and cause different lesions.

The fungi causing ringworm feed on keratin, a protein present in the epidermis of dogs, but also in their claws and hair. Their presence on the dog's skin leads to skin and hair lesions, but also to a change in the structure and appearance of the nails.

At present, about twenty dermatophytes responsible for ringworm have been identified in dogs. It should be noted that some of these fungi are not very contagious and cause only mild or even imperceptible symptoms. The most common dermatophytes are Microsporum Canis, Trichophyton Mentagrophytes, Microsporum Gypseum and Microsporum Persicolor.

Microsporum Canis, contrary to what its name might suggest, readily affects cats, which are highly contagious asymptomatic carriers and the source of many contaminations in dogs. It is also readily transmitted to humans. Trichophyton Mentagrophytes and Microsporum Persicolor are more responsible for ringworm in Terriers. They are found in rodents, which transmit them to their predators.

Finally, Microsporum Gypseum is a dermatophyte that has the particularity to hide in the ground. In fact, it is more common in outdoor dogs that like to make holes in the garden of their owners. A dog can be contaminated by several types of dermatophytes at the same time, which is not necessarily a serious factor.

Causes of ringworm in dogs

The spores of the fungi that cause ringworm live on the dog's hair and dead skin cells, which the dog naturally sheds all over the place as part of its life cycle. Therefore, the environment of an infected dog is usually a real reservoir for ringworm, especially since dermatophytes can survive for years on inert surfaces if their preferred living conditions are met.

Once the dermatophyte is on the dog's skin, it invades the hair follicles and the epidermis, which tends to deteriorate the quality of the skin and hair. Typically, scaly, circular lesions appear, sometimes inflamed and depigmented, without hair.

Depending on the dermatophyte involved and the health of the dog, the symptoms of ringworm may vary slightly. Microsporum Canis usually results in a spike, a tuft of spiky hair, which appears at the beginning of the infection, after about 4 weeks of incubation.

The hair invariably falls out, revealing a round hairless area that will slowly enlarge if left untreated. The skin may be scaly, but is rarely red or inflamed. Several hairless patches may come together to form the so-called "map" lesions typical of the disease. In immune-compromised dogs, ringworm may become more severe, with extensive or even generalized alopecia (alopecia).

This form of ringworm causes little or no itching and does not affect the dog's overall health. Microsporum Persicolor and Trichophyton Mentagrophytes manifest themselves by less smooth lesions, often with papules or pustules (pimples containing or not pus).

In this case, itching is often intense and the area may be very inflamed, resulting in redness, crusting and/or oozing. This form of ringworm causes symptoms quite similar to autoimmune dermatitis, a condition with which it is often confused.

Other symptoms that may be indicative of dermatophyte infection in dogs include inflammation of the nails and subcutaneous tumors (mycetomas). These types of ringworms, which are more common in cats, are not yet well described in dogs and remain uncommon. 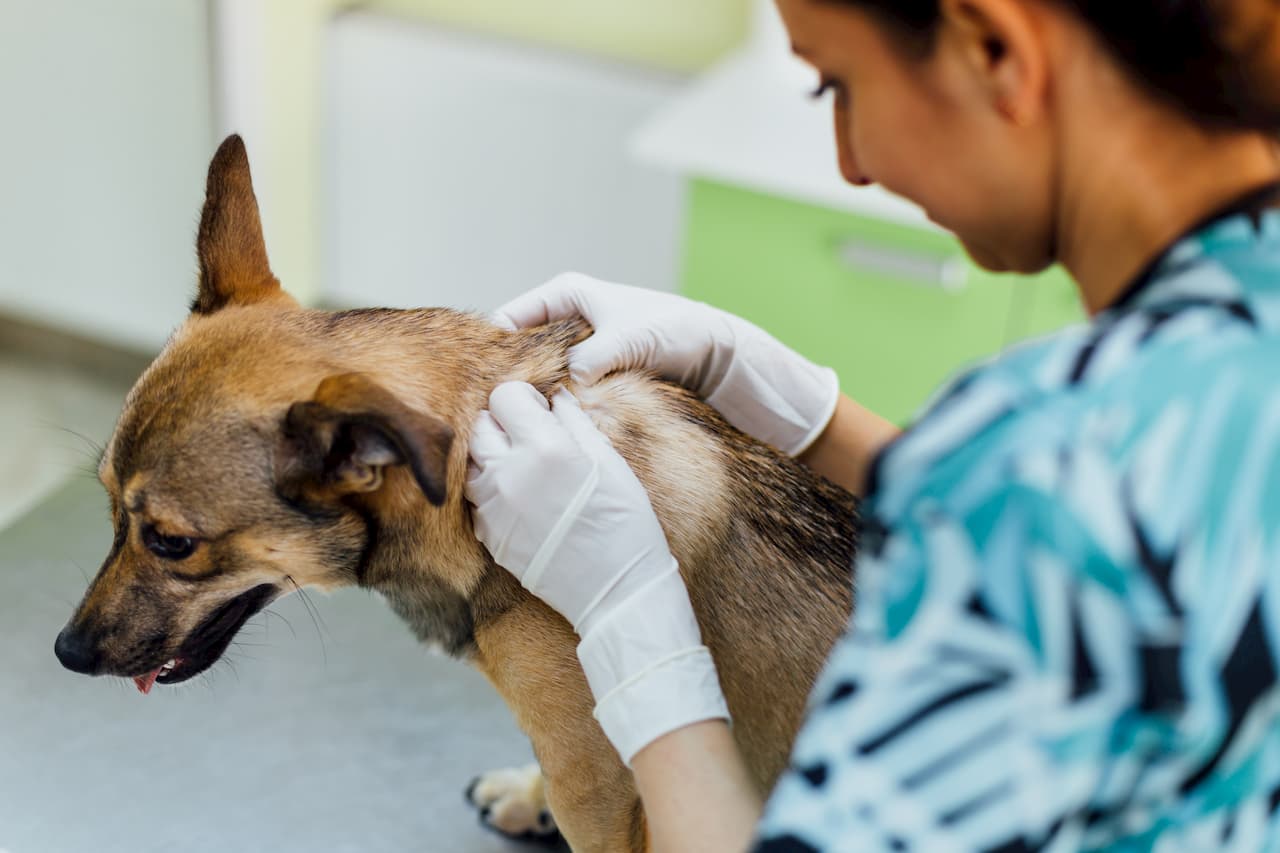 Ringworm is not systematically treated in dogs, especially because it is not always diagnosed. In fact, it is a self-limiting disease, which means that it stops growing on its own after a while and often disappears.

In healthy dogs, it is therefore possible to miss ringworm that would have caused few symptoms, especially since it does not systematically cause symptoms in humans either. In immunocompromised dogs, however, ringworm can become more severe, and treatment is essential to limit the animal's discomfort and to avoid potential complications, including infection if there is significant inflammation.

Treatment usually consists of a combination of topical and oral treatments to eliminate the symptoms caused by ringworm and limit the risk of infection. A thorough clipping of the dog's coat is required to eliminate the dermatophytes present on its hair. Ringworms are usually found all over the dog's body, so it is not effective to shave only the areas with lesions.

The dog should then be bathed daily in water with an antifungal medication prescribed by the veterinarian. This type of treatment can be a bit daunting, but it is much more effective than local creams or ointments that do not treat the whole body.

An oral treatment is usually prescribed as a complement to accelerate the resorption of the lesions and avoid complications. The most important drugs are antifungal drugs, which must be administered over the long term (at least 6 weeks).

Indeed, skin fungi, whatever they are, are well known to be very tenacious, and even if they are not really dangerous, it can be very difficult to get rid of them completely. Finally, as in the case of a flea infestation, the owner must take care to decontaminate his environment. A big spring cleaning is therefore necessary, with vacuuming and disinfectant - bleach usually does the trick.

A spray of enilconazole (an antifungal agent) is also very useful to sanitize the environment and get rid of ringworm once and for all. Bad news for the rest of the household: other animals that have been in contact with a dog with ringworm or its environment usually need to be treated as well... And so do humans!

My dog is losing its hair, does it have ringworm?
Many pathologies can cause hair loss in a dog, and ringworm is not always the cause. Generally, it can be distinguished from other potential causes by observing round hairless patches, which itch little or not at all, and where the skin is not or only slightly damaged.

Can ringworm be cured in dogs?
Yes, it is possible to get rid of ringworm, despite its reputation of being very stubborn. It is true that the treatments to eliminate it are rather constraining, but they are nevertheless effective.

Is ringworm dangerous for dogs?
No, ringworm is not really dangerous for dogs. It is a simple skin fungus that causes small unsightly peels, but does not cause serious problems. However, it can be transmitted to humans, in whom it is not more dangerous, but rather socially disabling, because it is very stigmatizing. Also, it can become embarrassing in immunocompromised individuals - dogs as well as humans, in whom it sometimes takes important proportions.

Is ringworm in dogs contagious to humans?
Yes, ringworm is a very contagious disease that is transmitted from animals to humans, from dogs to cats and from rodents to predators. However, it is not serious and can be treated to get rid of it permanently.

Ringworm can be a scary disease because it is associated with a stubborn condition that is difficult, if not impossible, to get rid of. In fact, this is not the case, and it is possible to treat a dog with ringworm and completely eliminate the fungus that causes it.