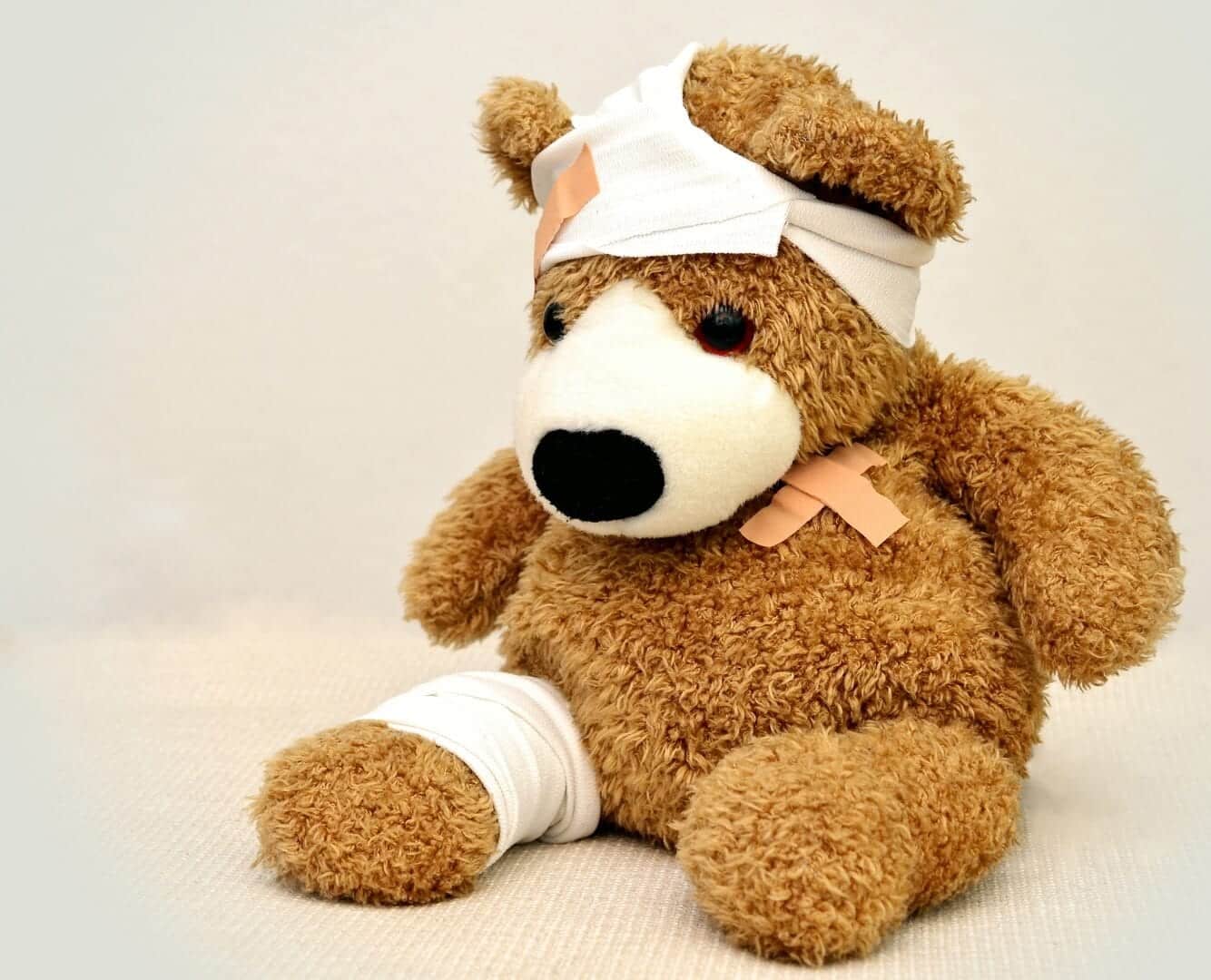 Bandaging your dog is sometimes necessary to prevent a small wound from getting worse. Unfortunately, this is much easier said than done, as bandages tend to slip on the animal's coat.

In addition, a poorly applied bandage can lead to complications, either by creating a tourniquet or by causing superinfection. This article discusses the art of bandaging, which can be a very important part of keeping your dog healthy.

Let me walk you through the process of making a bandage that works and holds!

What is a dog bandage?

A bandage is a device used to hold a dressing or splint in place to protect a wound or immobilize a limb. There are many different types of bandages, and we can distinguish between simple and complex bandages.

Simple bandages are used to hold a bandage on a cutaneous wound, i.e. on the skin of the dog. Complex bandages can, for example, be used to reduce a fracture, to immobilize a dislocated shoulder or to help the skin regenerate in case of a burn.

As complex bandages are the preserve of medical professionals, we will focus here on simple bandages that owners may need to make to protect their four-legged friends' minor injuries.

Why is it important to bandage your pet properly?

A poorly made bandage or one that is not adapted to the injury in question can aggravate the animal's injury, particularly by causing a tourniquet effect. Bandages that are too tight will cut off the blood flow, causing complications and health problems independent of the original injury.

In particular, blood-deprived tissue can become necrotic, and a tourniquet can disrupt blood flow on a systemic level. In addition, because dogs' hair has little grip, bandages tend to slip off, causing owners to tighten the bandage more in an attempt to keep it in place.

This is a very bad idea, as the risk of tourniqueting becomes consequent, whereas the vascularization of the wound is very important for its healing. Finally, it should be noted that a bandage that slips is of no use, and that a bandage made of ill-adapted materials can cause superinfections.

Knowing how to make a good dog bandage is therefore a great asset to avoid damaging your faithful companion more than he already is...

Making a bandage on my dog: what equipment?

Before starting to make a bandage for your dog, you will need to clean the wound: you will need a water source, a cleaning product and an antiseptic product.

Any pharmaceutical (disinfectant) or cosmetic (soap) products you use to clean your pet's wound should be suitable for dogs. You will also need sterile compresses, a strip of crepe and a roll of adhesive tape.

Finally, scissors will be essential to cut the crepe strip or pads to fit the bandage and dressing to the size of the dog and the wound. Never use cotton to make a bandage, as the filaments of this material tend to stick to the wound and promote infections.

Also avoid hook and loop tape, which can create tourniquets that can damage your dog's circulation.

Bandage your dog in 5 easy steps

1. Clean the wound
First of all, you must make sure that the wound is perfectly clean, and that all impurities are gone (soil, sand, etc.). To do this, clean the wound with warm water, possibly soapy, and shorten the surrounding hairs with a round-tipped scissor. Take advantage of this step to carefully inspect the wound: swelling, redness, heat or the presence of pus should alert you and prompt you to take your pet to the veterinarian.

2. Disinfect the wound
Once your dog's wound is clean and clear, apply a disinfectant specifically designed for dogs. Betadine and Biseptine, although intended for humans, can also be used on animals. Other than these two products - which can be purchased over the counter at any pharmacy - do not use human disinfectants or medications on your dog.

3. Step 3: Dressing the wound
Once you have cleaned and disinfected your pet's wound, you will need to protect it from outside pathogens to minimize the risk of infection. To do this, simply place a sterile compress over the wound, then proceed to the bandaging step.

4. Bandaging the wound
The bandage is used to hold the dressing (i.e. the compress) on the animal's wound: it must not press the wound or squeeze the dog. The easiest way to bandage a wound is to wrap a paw, but you can also bandage a wound on the chest, abdomen or head of your dog by wrapping a bandage around the affected body part. In the case of an abdominal or head wound, the bandage is much more massive than the dressing, which may give the impression that it is out of proportion to the severity of the wound.

This is not the case: the length of the bandage and the size of the bandage do not depend on the size of the dressing, and therefore the wound, but only on the part of the body to which the compress must be attached. To make the bandage, wrap a strip of crepe around the part of the animal's body where the wound is located over the pad. Each turn of the strip should cover half of the previous strip, and there is no need to go over the same spot twice. The band must be applied and not tightened so as not to create a tourniquet: the fixation step comes next!

On the contrary, it must be placed perpendicular to the direction of the bandage, i.e. from the top to the bottom (from the dog's rump to his toes). You can strengthen your bandage by placing two adhesive strips at the top and two adhesive strips at the bottom of the bandage: one on the outside of the limb and one on the inside. Finally, although it may be tempting, never attach the tape to the animal's shaved or bare skin: the glue is extremely irritating and can cause complications that slow down healing (burns, infections, itching).

To attach a bandage to another part of the dog's body, proceed in the same way, i.e. always attach the adhesive strip perpendicular to the crepe strip, and place it half on the strip and half on the dog's coat. 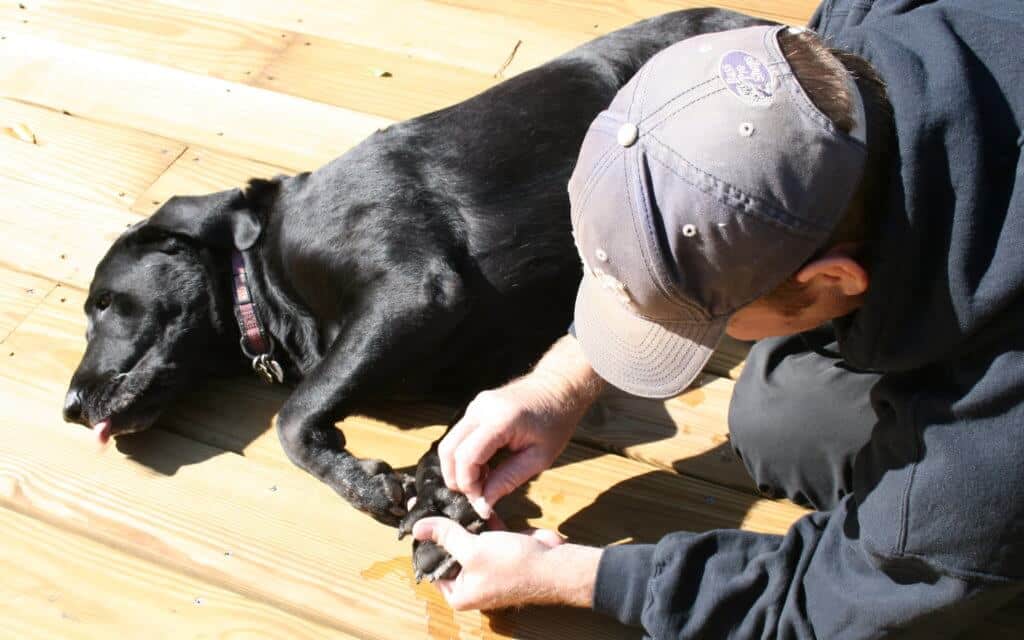 How can I prevent my dog from removing the bandage?

Once the bandage is well fixed, it remains to protect it to avoid that your dog removes it, but also so that it is not wet by the bad weather and soiled by a compulsive licking or by the dirt of the outside. A bandage on one of the animal's legs can be covered with a sock, which can be secured with tape (always taking care not to create a tourniquet).

If your dog spends time outdoors, in a humid environment or in rainy weather, it is better to opt for a waterproof protection like a plastic bag. To protect a bandage on your dog's body, you can dress him with an old T-shirt or soft pants in which you cut a hole to let the tail through.

Finally, it is sometimes necessary to put a collar on your faithful companion if he is really determined to lick his bandage or tear it off. It is also possible to buy repellent tasting bandages, intended to discourage the dog from trying to rip or lick it off, but the most reckless animals will not be fooled by such a device.

Why bandage my dog?
Bandaging is used to protect a dressing or to hold it in place, in order to cover a wound and reduce the risk of infection.

How do I get a bandage to stay on my dog?
Ideally, the bandage should be secured with adhesive tape, taking care never to create a tourniquet to avoid causing complications.

How can I prevent my dog from removing the bandage?
Protecting the bandage with an old piece of clothing (sock, T-shirt or soft pants) or a plastic bag is generally an effective solution. However, if your dog is determined to remove his bandage, the best solution is to put a collar on him which will simply prevent him from accessing the bandage.

What materials are needed to make a bandage on a dog?
The bandage itself only requires a strip of crepe and adhesive tape, but it must be applied to a clean wound and dressing. You will need water, soap, disinfectant, compresses, crepe tape, adhesive tape and scissors to properly bandage your dog's wound.

Bandaging a dog is not an easy task, especially when the wound is on a large part of the body, such as the chest, abdomen or head. In addition, the longevity of the bandage is often jeopardized by dogs who do not appreciate having something stuck to their fur and will do anything to get rid of it.

However, a well-made and well-fixed bandage has every chance of lasting... At least until the time comes to renew the bandage!