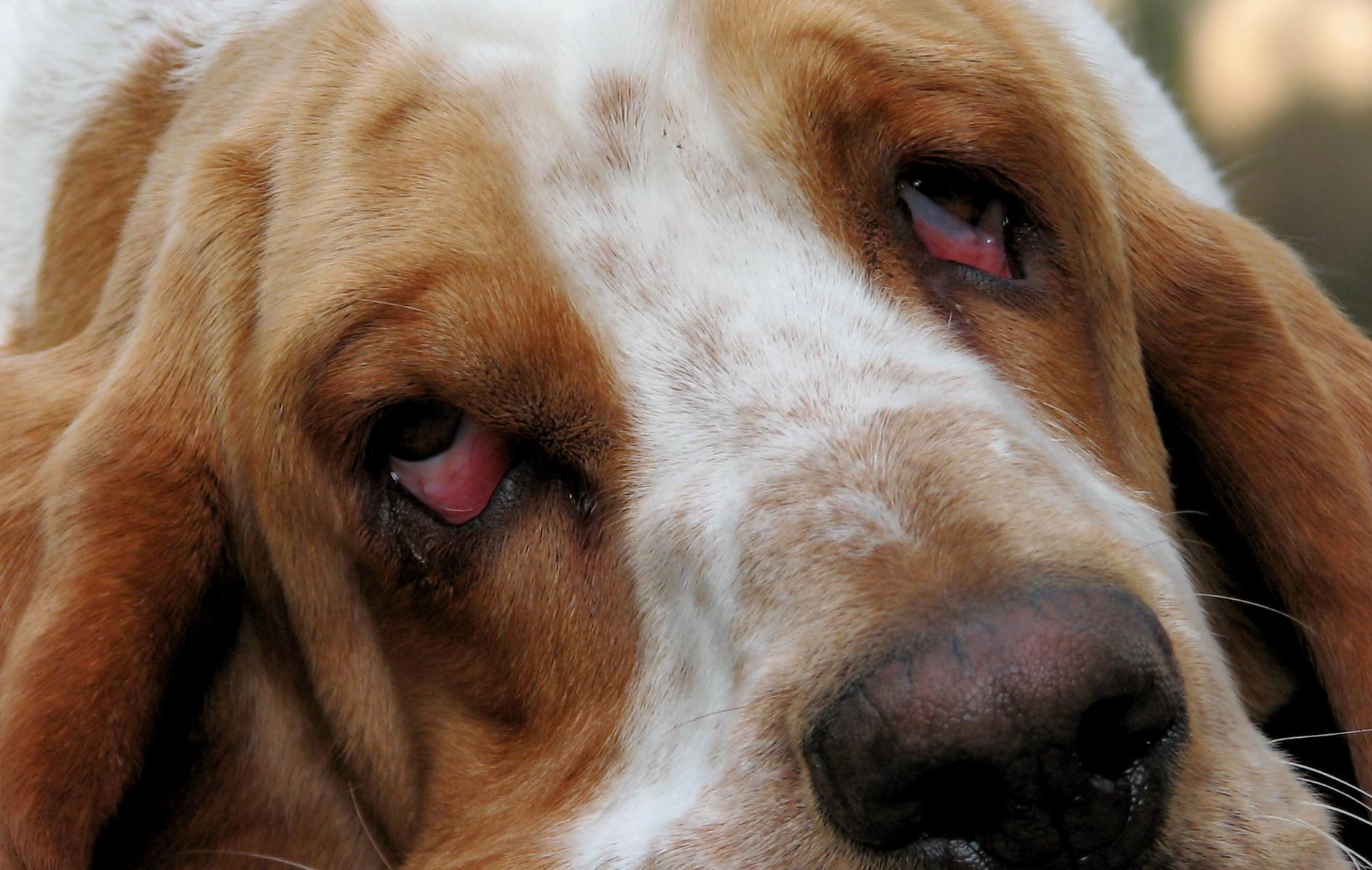 Dog entropion is a relatively common eye condition that is too often neglected, despite the severe pain it causes the animal.

In fact, entropion is sometimes difficult to detect, as novice owners may think that there is nothing alarming about seeing their dog crying his eyes out, and not realize that their dog's eyelid is not quite right. Eye ulcer, conjunctivitis or irritation... The consequences of entropion on your dog's health can however be dramatic, even causing blindness, in addition to continuous suffering.

What is dog entropion?

Dog entropion is a malformation of the eyelid which is abnormally rolled towards the inside of the eye, letting the dog's eyelashes and hairs come into contact with its eyeball. The dog's eyelashes and hair will then rub against its cornea, either permanently or, in less severe cases, only in certain situations (when the animal blinks, for example).

Entropion can affect the upper or lower eyelids of the dog, and can affect one or both eyes. This is in contrast to ectropion, in which the eyelid (usually the lower one) curls outward.

The vast majority of entropions in dogs are congenital and appear at birth or develop in the following months as the puppy grows. However, acquired entropions can occur mainly as a result of an eye condition that results in poor healing of the eyelid following an injury.

Entropion in dogs can have different degrees of severity depending on the extent of the eyelid deformity and its impact on the mobility of the eyelid, which is supposed to be able to close and open completely to play its protective role and ensure the health of the eye.

There are different types of entropions in dogs, with varying causes. There are congenital or developmental entropions and secondary entropions.

Congenital entropions in dogs
Congenital entropions are, by far, the most frequent in dogs. Their cause is genetic, and these genetic disorders find their origin essentially in the racial selections implemented to obtain ever more beautiful dogs, in other words, in humans. Indeed, it is not for nothing that entropion is the main pathology of brachycephalic breeds (with flat muzzle) whose morphology has been artificially worked to obtain products that meet physical criteria invented from scratch by humans.

Canine selections are processes aiming at breeding dogs with common physical characteristics in order to keep them, or even to reinforce them, through the lines produced. From this point of view, inbreeding is the reference technique, and if it is nowadays limited by the official canine organizations, the damage is already done, and the genetic heritage of the breed dogs is particularly poor.

This means that all the dogs of the same breed have a relatively close genome, since they are all, from near or far, related. In addition to the very disabling aspect of certain physical traits exaggerated to please consumers - let's underline that some brachycephalic dogs can't even breathe without suffering - this type of selections leads to the persistence of defects in the genome of the dogs.

This is how entropion has become, through human selections, a common genetic anomaly in dogs, especially in purebred dogs - crossbred dogs are almost completely spared from this problem. Brachycephalic breeds are overrepresented, as are those with excess facial skin. The location of entropion is often breed specific.

The most frequent congenital entropion is that of the internal angle of the lower eyelid. It is most common in Labradors, Akitas, Chow Chows, English Bulldogs, Poodles, Bichons, Golden Retrievers, Pugs and Rottweilers, just to name a few of the most popular dogs.

This type of entropion usually consists of an abnormal elongation of the eyelids which cannot open sufficiently and causes a retraction of the eyeball, even hindering its growth.

The entropion of the upper eyelid is rather the prerogative of Cockers, and the French Bulldog and the Shar-Peï are, them, the sad losers of the classification with a predisposition to entropions of the lower and upper eyelids.

Secondary entropions in dogs
Secondary entropions are conditions that occur as a result of a primary disorder, which may be traumatic, infectious or degenerative. Senile entropion affects older dogs as the tarsus of the upper eyelid gradually loosens and loses density. The tarsus is a connective tissue that supports and shapes the eyelid.

It is a natural degeneration that occurs as the body's various tissues wear out, a process that is, after all, inevitable. Nevertheless, senile entropion is not a fatality, and its "natural" character should not push you to ignore it by letting your dog suffer: a simple and definitive treatment is often possible, and will offer your dog the possibility to continue to live in good conditions.

Spastic or spasmodic entropion is a condition that can occur in response to persistent or chronic pain. An eye ulcer or conjunctivitis is often the cause of the problem. The eye retracts, leaving the eyelid with abnormal room to retract inward.

In this case, a drug treatment targeting the cause of the problem usually makes the entropion disappear permanently. Scarring entropion occurs following an injury that has not healed properly. The scar tissue changes the shape and/or size of the eyelid, which may curl inward.

Symptoms of entropion in dogs

Entropion often causes intense pain in the dog's eye. The eyelashes and hairs on the eyelid also tend to traumatize the conjunctiva and cornea, causing more or less severe irritation. The eyelid defect itself is not always detected by the owner, because it is not systematically visually shocking. However, it is sometimes unmistakable, giving the eyes an unsightly and unusual sunken appearance.

The eye is often reddened, irritated, watery, completely or half closed. Miosis (pupil retraction) may occur in response to increased sensitivity to light. The dog may scratch the eye, which tends to make the problem worse by further irritating the eyeball. Adjacent areas may be damaged by this scratching, and the area around the eye may be hairless, crusty and red.

In severe pain, the dog may become aggressive or show signs of distress or even undesirable behavior (uncleanliness, destruction of property, etc.). Eventually, entropion can cause an eye ulcer, which can be recognized, in its advanced stages, by an opacification of the cornea. If left untreated, eye ulcers can lead to ocular perforation and blindness. 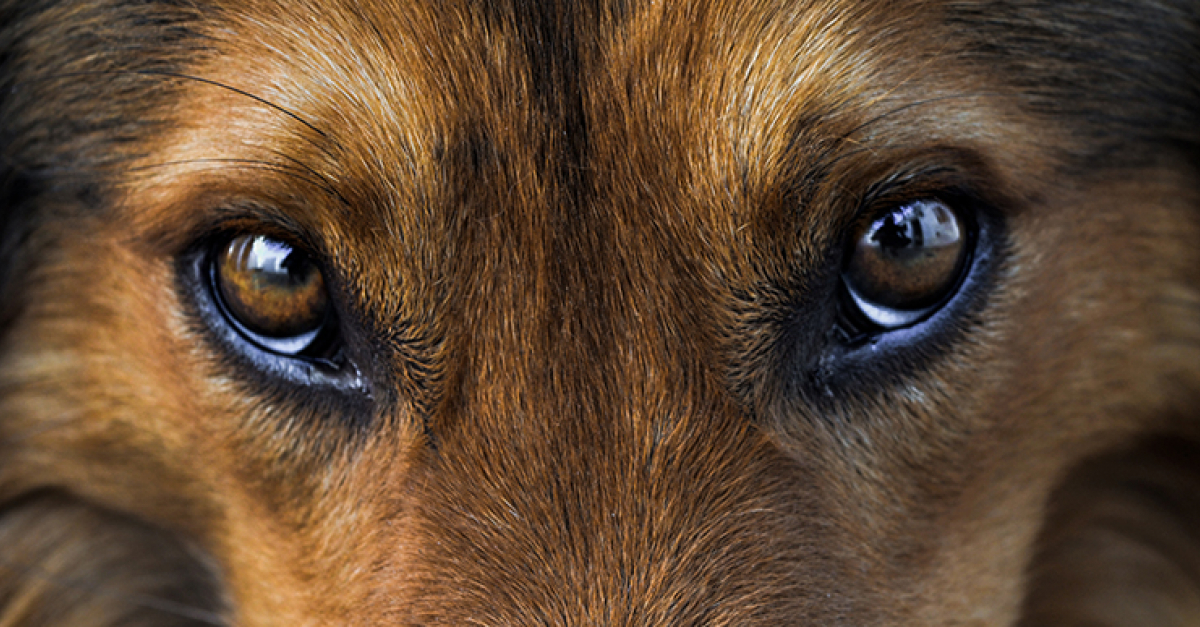 Treatment and prognosis of entropion in dogs

The treatment of entropion is always surgical, except when it is due to an eye infection, in which case it can be treated with antibiotic drugs. In the case of congenital entropions, it is often necessary to wait until the puppy is fully grown, otherwise the problem may recur after surgery.

It is important to note that an entropion in a puppy can also disappear on its own during growth, but this is quite rare. If the entropion causes the puppy pain, the eyelid can be sutured during growth. This keeps the eyelid closed and prevents the hair and lashes from traumatizing the eye, which increases the animal's comfort and prevents ulcers that can lead to lasting damage.

Each entropion requires a different surgical procedure, depending on the type of deformity involved. Laser treatment is preferred for better healing. Sometimes it is necessary to reconstruct part of the eyelid to restore its full functionality.

The prognosis of entropion is very satisfactory when surgical treatment is performed. Complications are rare, and dogs that undergo surgery generally regain perfect visual health in the long term.

How to know if my dog has entropion?
Entropion, especially when it is mild, is not always obvious to the owner, but it is often quite possible to observe it by looking closely at the eyelids of your dog: they are badly formed, rolled inwards. A dog suffering from entropion is usually overwhelmed by a strong pain: you will therefore observe a reddened, watery, sometimes swollen and irritated eye. The dog's eyelid often remains closed (totally or partially), and the eye appears to be sunken in its socket.

What causes dog entropion?
The vast majority of canine entropions are congenital in origin, so puppies are affected by this malformation from birth, and it reveals itself more or less early during their growth. There are also secondary entropions, occurring in reaction to inflammation or irritation of the eye, as well as forms affecting older dogs, whose eyelids tend to droop.

Is it possible to treat a dog suffering from entropion?
It is quite possible to successfully treat a dog suffering from entropion, and it is even essential to avoid the animal suffering, sometimes intensely, for the rest of its life, or even losing its sight. The treatment is almost exclusively surgical, and offers a very good prognosis, with the prospect of a complete and definitive cure.

What are the consequences of dog entropion?
Entropion is often extremely painful for the animal. Because the hair and eyelashes of the dog's eyelid are constantly rubbing against the eye, the conjunctiva and cornea are irritated and can develop serious lesions. Eye ulcers, a common and severe complication of entropion, can lead to eye perforation and blindness.

Dog entropion is a condition that can have serious consequences, both on the health of your four-legged friend and on its quality of life. It is therefore essential not to neglect it, and to present your dog to a veterinarian if you suspect any ocular disorder in him.

Fortunately, entropion can be treated well, even if the animal will almost always need a scalpel to heal!