Signs of turned stomach in dog 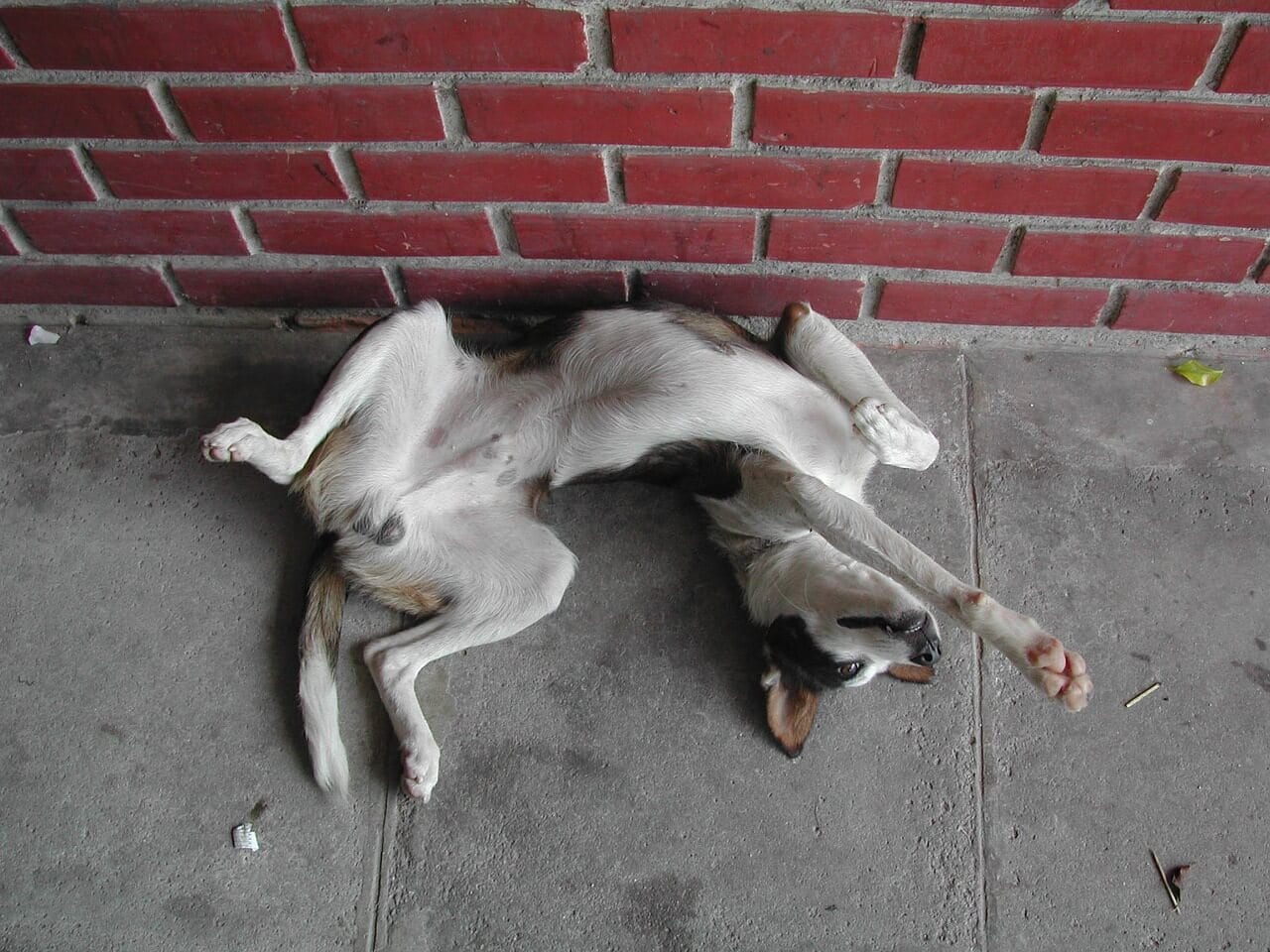 Signs of turned stomach in dog

The Stomach Dilation-Twist Syndrome in dogs, also known as "stomach turning", is an absolute veterinary emergency.

It is therefore essential to know how to detect the symptoms, in order to act quickly to prevent the animal's vital prognosis from being compromised. A good knowledge of the risk factors of EDS also allows you to implement some preventive measures to avoid your dog from becoming a victim one day.

However, despite all the precautions taken by owners, Stomach Dilation-Torsion remains a common condition, and many dogs are likely to be affected at least once in their lives.

What is Stomach Turnover Syndrome?

Stomach turning is a syndrome, or set of symptoms, that occurs when an animal's stomach is abnormally swollen due to an accumulation of gas, liquids or solids. The organ then begins to rotate - often clockwise - reversing the position of its entrance (esophagus) and exit (pylorus).

In this position, the stomach is no longer able to empty itself, which amplifies the phenomenon of dilation and leads to complications, often fatal. In particular, the stomach can drag the dog's spleen along with it, and its dilation can seriously compress the vena cava and the portal vein, which ensure the return of blood to the heart.

It would be ridiculous to imagine that a Dilation-Torsion of the Stomach is as harmless as an ordinary stomach ache and could heal without intervention. The animal must absolutely be taken to a veterinarian who, in most cases, will perform a surgical intervention.

In the case of stomach dilatation-torsion, it is important to note that the dog's prognosis is life-threatening, and that its life expectancy will not exceed a few hours - during which it will suffer greatly. It is therefore much safer to consult a veterinarian too early, or even in case of a false alarm, than to wait - even if only for an hour - before taking your dog to the emergency room.

What are the symptoms of Stomach Turnover in dogs?

There are several symptoms that are typical of Stomach Twisting, but a dog affected by this syndrome will not necessarily exhibit all of them. Initially, the dog's behavior changes. He may be more agitated than usual or, conversely, prostrate or downcast.

It often expresses palpable anxiety, failing to remain calm and relaxed, and may show signs of aggression or fear. He or she may also try to express pain by moaning or adopting pain-relieving postures (round back and hanging head).

Digestive disturbances are also typical of Stomach Dilation-Torsion Syndrome in dogs. The animal often tries to vomit without succeeding and presents a very marked hyper salivation, sometimes to the point of having its mouth filled with foam.

The abdomen may be distended and hard to palpate, and may make a thumping sound when gently tapped. The animal may also show breathing difficulties, panting rapidly and showing an increased heart rate.

The mucous membranes, usually bright pink, may change in appearance, first becoming dark red, white, and then purplish (cyanosis). Signs of general weakness will then appear, and the dog will eventually lose consciousness if not attended to quickly.

One of the common causes of Stomach Twisting-Dilation Syndrome in dogs is eating a large amount of food or water before exercise. Stress and anxiety are also factors that experts suspect play a significant role in the development of Stomach Dilation-Torsion Syndrome.

The age of the dog is also a risk factor in stomach turning, and there is also a hereditary vector, with the risk increasing by 63% in individuals with a parent who has already suffered from ESDS. Finally, large dogs are among the most affected, including the Great Dane, German Shepherd, Weimar Pointer, Akita Inu, St. Bernard, Boxer and Giant Poodle.

What are the consequences of Stomach Twist?

Stomach overturning results in shock, resulting in rapid respiratory and cardiac distress of the animal. This is because the dilated stomach puts pressure on the vena cava and portal veins, which decreases venous return and causes a decrease in cardiac output, arterial hypotension and hypoperfusion.

Hypoperfusion consists of a deficit of oxygen in the whole body, because the blood can no longer irrigate the different organs and tissues (hypovolemic and hypoxemic shock). Eventually, the retention of blood due to impaired circulation leads to an accumulation of toxins in the animal's body, which are no longer transported to the liver to be filtered (endotoxemic shock).

The shock thus suffered by the animal triggers complications, and in particular the stasis of blood in the circulatory system which causes a degradation of the dog's coagulation capacities. The risk of internal hemorrhage becomes considerable, threatening the days of your four-legged friend if he is not treated as soon as possible. 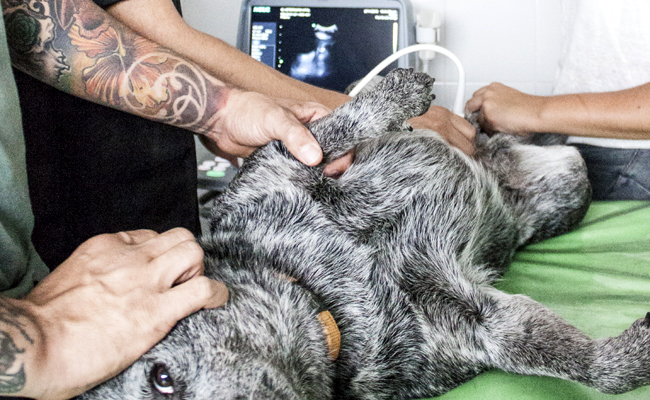 What should I do if my dog's stomach is turned inside out?

The Stomach Dilation-Torsion Syndrome is an absolute veterinary emergency, so it is necessary to bring your pet as soon as possible to an establishment where he can be taken care of and operated on (most often a veterinary clinic or hospital). Contact the facility to inform the veterinarian of your arrival and try to describe the situation, your pet's symptoms, as well as its breed and its usual state of health.

The treatment protocol may differ if the animal is already weakened, if it is an old dog or a very young puppy. Ideally, the owner should not attempt to treat his dog himself, in order not to waste time.

However, if he is forced to wait, he can try to give Gastrogel or Polysilane (medicines for humans) to his companion. These dimethicone-based medications limit the formation of gas in order to stop the stomach from expanding and gain a few minutes.

Don't try to give your dog any other medication - especially if it's for humans - as you may make him worse by poisoning him. Finally, take precautions when giving Gastrogel or Polysilane to your dog: in this situation, the risk of a false start is tenfold!

How to recognize a Stomach Dilation-Torsion in dogs?
Multiple symptoms can be very typical of a Stomach Dilation-Torsion Syndrome, also commonly called "stomach turning". The dog is often agitated or, on the contrary, prostrate; it usually tries to vomit without succeeding and salivates excessively, so much so that its mouth may be covered with foam. Respiratory and cardiac disorders can also be observed, manifested by rapid panting, a change in the color of the mucous membranes and tachycardia.

How to prevent Stomach Dilation in dogs?
Avoid feeding your dog large amounts of food and divide his meals into smaller portions. The same goes for water: always leave a bowl of clean water available to your dog to prevent him from getting thirsty and drinking large amounts at once.

Which dogs are prone to Stomach Dilation-Torsion?
Stomach Dilation-Twist Syndrome affects all dogs, but large dogs are the most affected. One of the most serious conditions, Stomach Torsion-Dilation Syndrome is life-threatening and your dog's survival depends on prompt veterinary care.

If you have a large dog, or its first-degree relatives (father, mother, sisters, brothers) have already been victims of this syndrome, I recommend that you carefully monitor your dog after its meals. Make sure to always split his meals, and not to let him engage in intense physical activity right after eating.