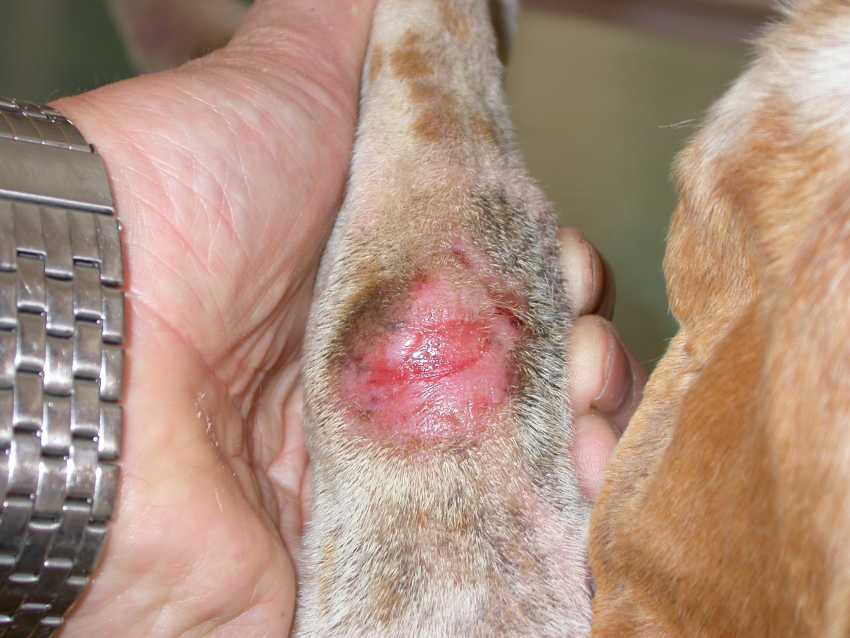 Pyoderma in dogs is a very common infection in our four-legged friends, caused by a bacterium naturally present on their body, which starts to proliferate abnormally.

This disease exists in a deep form and a superficial form, both of which involve different symptoms and prognosis. With proper treatment, the prognosis for the animal is good, but the risk of relapse remains quite high, especially if the dog has other chronic skin disorders independent of pyoderma.

What is pyoderma in dogs?

Dog pyoderma is a pathology caused by a staphylococcus type of bacteria, which is naturally present in the animal's body, but suddenly starts to proliferate in an abnormal way due to circumstances favorable to its development. Very often, the animal has another underlying pathology (often a dermatosis) which is complicated by a bacterial superinfection leading to pyoderma.

It should be noted that staphylococcus is not the only bacterium that can cause pyoderma, but it is simply the pathogen most often involved in the appearance of this pathology. Pyoderma in dogs usually manifests as skin lesions when it is limited to the epidermis and hair follicles of the animal, in which case it is said to be superficial.

More rarely, pyoderma can take a deep form. In this case, the bacteria colonizing the dog's skin cross the basement membrane (the barrier between the dermis and the epidermis) and reach the lower layers of the animal's skin. These forms of pyoderma are rarer, but they are also more serious, as they can cause a very virulent generalized inflammation.

Causes of pyoderma in dogs

In most cases, a dog develops pyoderma as a result of a chronic skin condition, including a dermatosis (skin condition) such as atopic dermatitis. In addition, dermatoses are usually themselves caused by an underlying disorder, often an allergy or the presence of parasites, such as the mites responsible for sarcoptic mange or demodecitic mange.

More rarely, the dog may also develop behavioral dermatitis, due to compulsive scratching or licking, which is a sign of malaise and great emotional distress. Finally, hormonal disorders, traumas or metabolic disorders are also likely to generate dermatoses which can be complicated by pyoderma.

In fact, pyoderma is often caused by multiple chain reactions, a succession of seemingly benign disorders that tend to lead to systemic health problems. In all cases, it is necessary for the veterinarian to investigate by going back into the dog's medical history and taking into account its lifestyle and environment with the full cooperation of the owner to identify the cause(s) of the dermatitis at the origin of the pyoderma.

Symptoms of pyoderma in dogs

The symptoms of pyoderma in dogs vary depending on whether it is superficial or deep. It is important to note that untreated or recurrent superficial pyoderma is likely to progress to more severe deep forms.

In the case of superficial pyoderma, the dog presents pimples (pustules and papules) that can be easily observed on the areas of its body without hair, where the skin is particularly thin (belly, inner thighs, around the eyes and the muzzle). The disease is also manifested by peeling, usually located on the trunk of the animal, as well as by scales, redness and crusts, as well as lesions with a very typical circular appearance, surrounded by a scaly epidermal collar.

In the case of deep pyoderma, much more severe lesions appear in the form of boils or even abscesses, and, in the long term, crusty patches that are sometimes purulent. Generally, superficial and deep pyoderma cause more or less intense itching in the animal, which aggravates its case by scratching itself to the point of bleeding, self-inflicting wounds that can become infected.

It should be noted, however, that the symptoms described here, and in particular the circular lesions with collars, are typical of pyoderma caused by staphylococci. Pyoderma caused by other, rarer bacteria may produce other types of lesions and symptoms.

Consequences of pyoderma in dogs

The pyoderma of the dog can be complicated in superinfections, but it remains rather rare that this disease degenerates and gives place to true septicemia engaging the vital prognosis of the animal.

However, the deeper the disease, the more important the lesions will be, causing more and more intense itching leading the dog to scratch harder and harder, often to the point of injury.

Overwhelmed by the disease, the dog may also present a general depression, anorexia, behavioral problems and other non-specific symptoms translating its malaise. 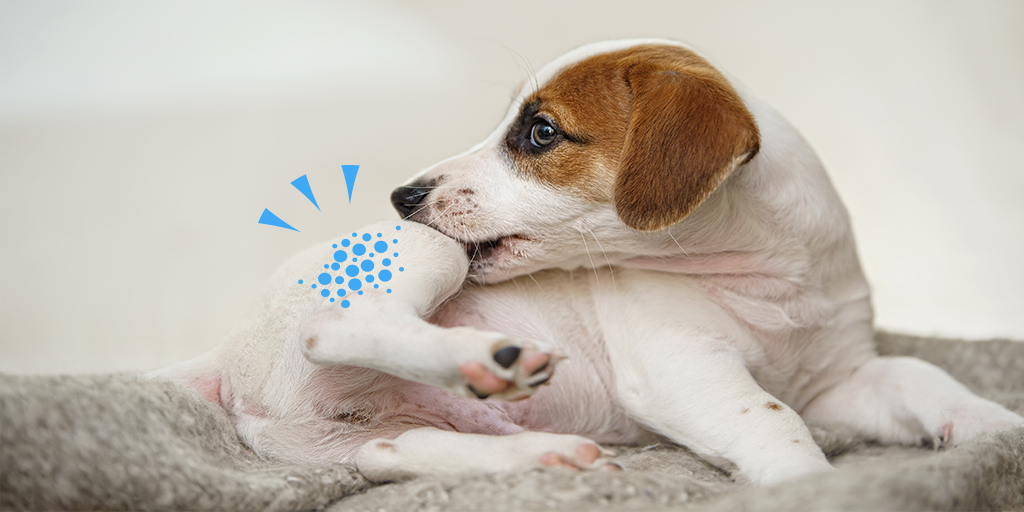 Prevention and treatment of pyoderma in dogs

Dog pyoderma is usually caused by staphylococcus and can be treated with appropriate antibiotics after diagnosis by a veterinarian. The staphylococci involved in dog pyoderma are not usually particularly resistant bacteria, but if the condition persists despite initial therapy, it may be necessary to alternate antibiotics.

Treatment for this condition may last 1 to 3 weeks, and may even last longer in cases of deep pyoderma. Relapses are quite common, especially in animals with a favorable background for the development of skin disorders.

Animals with allergies or subject to chronic dermatitis must first be treated for these underlying pathologies, which favor the appearance of pyoderma. Therefore, treatment of pyoderma is not limited to the elimination of the bacteria involved, but must address the primary conditions that promote bacterial overgrowth to avoid relapse, and is therefore usually long-term, after an often equally long investigation.

In some cases, a treatment consisting of topical care (directly on the skin) can be sufficient to control a very superficial pyoderma. The aim is to sanitize the dog's skin to control bacterial proliferation. When an allergic background favors the appearance of pyoderma, which is often the case, it is advisable to find the element in question, in order to banish it from its environment to avoid relapses, which is often long and complex.

Note that recent studies tend to show that many dog allergies resulting in skin disorders are of food origin, so your dog's kibbles or pate may be a first line of investigation.

How do I know if my dog has pyoderma?
The clinical symptoms of pyoderma in dogs are usually typical: they are skin lesions in the form of red pimples, relatively prominent and surrounded by a scaly collar. In all cases, it is essential to go to a veterinarian who will make a definitive diagnosis and will search for the cause of your dog's pyoderma, in order to set up an adapted treatment and to avoid relapses, unfortunately frequent.

Why does my dog have pyoderma?
Most pyoderma in dogs occurs when the animal is already burdened by other skin disorders, such as dermatoses, including atopic dermatitis. Pyoderma then develops as a result of a series of disorders, the origin of which must be identified in order to establish an effective treatment. It is possible that your dog suffers from allergies, racial predisposition, or underlying metabolic or infectious disorders that only a veterinarian can diagnose.

How to treat pyoderma in dogs?
In most cases, pyoderma is treated with antibiotics that only a veterinarian can prescribe, following a definitive diagnosis. However, pyoderma is almost always a complication of other skin disorders, and it is therefore important to identify the causes of these primary disorders in order to treat pyoderma and avoid relapses. On the web, there are many grandmother's remedies for pyoderma in dogs, but none of these home remedies have been proven to be effective, and you should not take this disease lightly and turn to a veterinarian to help your dog.

Is my dog predisposed to pyoderma?
There is no racial predisposition to pyoderma in dogs, as these conditions are very common and affect all animals. However, breeds of dogs that are predisposed to other skin disorders, particularly atopic dermatitis, are more likely to develop pyoderma. Pyoderma is a disease that can manifest itself with sometimes very impressive symptoms, but it is usually quite treatable when its causes are properly identified. Unfortunately, relapses are common, especially since it is particularly difficult to diagnose the true cause of this disease, which usually occurs as a complication of dermatoses, which are themselves caused by other disorders.

To allow your veterinarian to identify the origin of your dog's pyoderma, it is important to be attentive to his habits, his lifestyle and to control his diet, in order to fully participate in the medical investigations necessary to detect the primary causes of the problem.