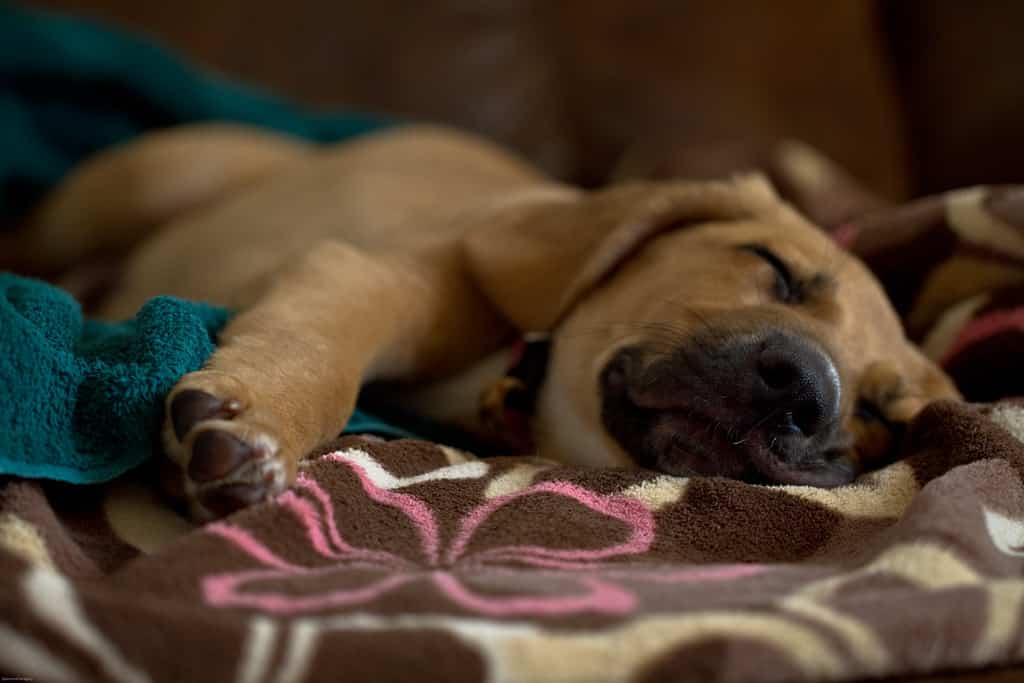 Parvovirosis is considered the most serious and contagious disease of the puppy, along with distemper.

This pathology, which manifests itself by an extremely severe hemorrhagic gastroenteritis, has a very high mortality rate, despite the evolution of veterinary treatments. A disease that is still too widespread, that it is advisable to know well in order to protect efficiently the health of your puppy.

Parvovirosis of the puppy, what is it?

Canine parvovirosis is an infectious disease caused by a virus, the canine parvovirus type 2, also known as CPV 2, which stands for Canine Parvo Virus 2. Parvoviruses of the dog can take intestinal or cardiac forms, the first one being manifested by severe gastroenteric disorders, the second, rarer, by a brutal cardiac arrest or a fulgurating pulmonary oedema.

This disease is sometimes called Puppy Parvovirus, because young animals are very sensitive to it, while 80% of adult dogs infected with CPV 2 are often asymptomatic.

Intestinal form of Parvovirosis in puppies
The intestinal form of Parvovirosis is caused by infection through oral contact, often when the puppy sniffs too closely at feces, soiled soil or contaminated objects. Once the parvovirus is ingested by the puppy, it colonizes the tissues of the lymphatic system located in the animal's throat, from which it contaminates its blood. Once the parvovirus is in the animal's bloodstream, it attacks the lymph nodes, intestinal crypts (glands involved in the digestive process) and bone marrow, causing a decrease in the number of lymphocytes in the dog's body and necrosis of the intestine.

In response, bacteria normally present in the puppy's intestinal tract are able to cross the intestinal barrier, migrate into the body and, with fewer lymphocytes (cells that defend the body against pathogens), cause infections that can be complicated by septicemia. The severity of parvovirus generally depends on the bacteria present in the dog's digestive tract, with the more violent ones, such as Salmonella, being more dangerous and more likely to cause systemic infections.

The superinfection that follows a PVC2 infection then leads, in most cases, to a SIRS (Systemic Inflammatory Response Syndrome) complicated by a series of chain reactions (hyper coagulation of the blood, acute respiratory distress, etc.) that ends in the death of the pup. In a few rare cases, the bacterial infections resulting from Puppy Parvovirus cause myocarditis (heart muscle infections) and intestinal invaginations, displacement of the intestine causing an obstruction.

Since Puppy Parvovirus causes immune deficiencies that promote the development of infections that cause the severity of the animal's symptoms, it is more lethal when the puppy is previously infected with intestinal parasites or bacteria.

Cardiac form of Parvovirosis in puppies
The cardiac form of Parvovirosis is rarer, and affects more young puppies, while they are still in their mother's uterus or are less than 8 weeks old. In this case, the virus damages the heart muscle, causing necrosis of certain tissues, and the puppy dies from a sudden heart failure or from respiratory difficulties following a fulminant pulmonary edema.

Parvovirosis can also cause septicemia in puppies from birth, as well as nerve, kidney, lung or blood damage. Parvovirosis in puppies is not always fatal, but the survival rate depends greatly on how early the diagnosis is made and how quickly the animal is treated.

In the absence of treatment, the puppy dies in 91% of cases, a figure that drops to 50% to 20% when it benefits from a rapid aggressive treatment.

Symptoms of Parvovirus in puppies: how to recognize it?

A few days after being infected by the PVC 2, the puppy shows a very severe hemorrhagic diarrhea, sometimes accompanied by impressive vomiting. A symptom that is invisible to the owner, but very typical of the disease, is intestinal hypermotility, which can cause intussusception, which, in the context of an already severe disease, is often fatal.

Other nonspecific symptoms may accompany the course of the disease, including anorexia, fever, apathy, weight loss, and any other signs suggestive of generalized infection. The youngest puppies are the most susceptible and have the most severe symptoms of the disease, which is often fatal in them.

The virus that causes Puppy Parvovirus is transmitted orally when the pet ingests contaminated feces. At first glance, this may seem like a rare occurrence, but in reality, all it takes is for the animal to pick up a toy that has been left on a dirty floor or to sniff the hindquarters of another animal, as is common among our dog friends, to become infected.

In fact, Parvovirosis of the puppy is an extremely contagious disease and is very widespread in kennels and other places where there is a high density of dogs. It is a disease that is all the more difficult to control because adult dogs can carry the virus without showing any symptoms, thus contaminating other animals and contributing to the spread of the virus.

The gastrointestinal form of Puppy Parvovirus can be treated with symptomatic therapy. It's not possible to eliminate the virus from the body, so the only thing to do is to control its impact on the puppy's health, including treating the bacterial infections it causes and fighting the dehydration that can quickly occur with diarrhea and vomiting.

To do this, the puppy usually needs to be hospitalized and infused. Antiemetics and antacids can also be prescribed to calm the vomiting, and antibiotic treatment is essential to stop bacterial infections. In some cases, it is possible to treat the puppy with an antiviral drug that disrupts the replication of the virus and helps the body to better defend itself, but this type of treatment has a very variable effectiveness and is very expensive.

The cardiac form of canine parvovirosis has no treatment, and is usually diagnosed too late to act, often post-mortem. The puppy often dies suddenly from cardiac arrest, or within minutes or hours of the first pulmonary symptoms.

The good news is that there is a vaccine to protect your puppy from canine parvovirosis. However, it can be ineffective if it's not administered properly. Indeed, if your puppy's mother was vaccinated against the PVC 2, she will transmit her antibodies which will protect him until he is 6 to 8 weeks old.

After that, the puppy is no longer protected against the virus, but his mother's antibodies are still present in his body until he is 12 to 16 weeks old, making the vaccine ineffective, since they inhibit its effects. This problem, which is not taken into account by many veterinarians, is the reason for the bad reputation of the CPV 2 vaccine, which is often considered ineffective and useless.

Keep your home clean if you have other adult dogs, avoid letting your puppy sniff other dogs' feces, play with unfamiliar objects and rub up against other unvaccinated animals. 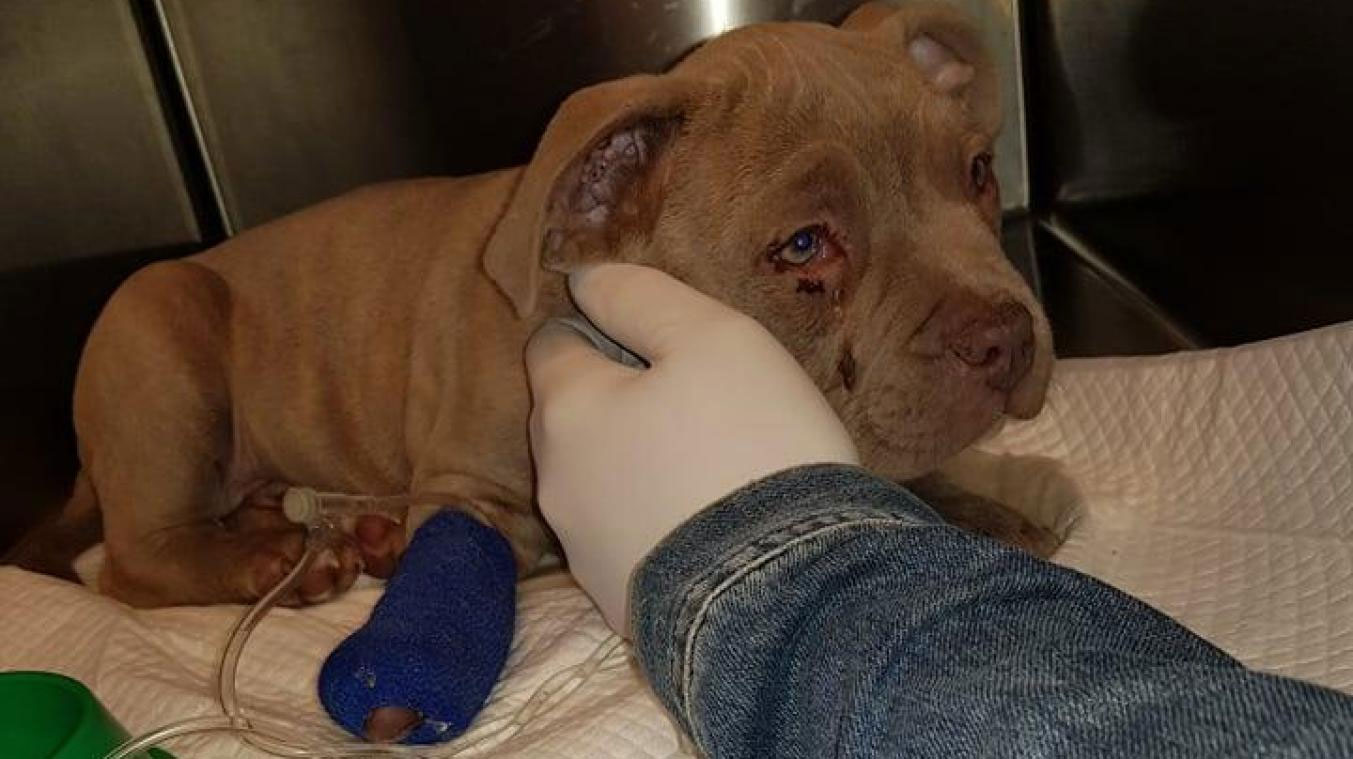 What to do if your puppy has parvovirosis

If your puppy shows symptoms of canine parvovirosis, i.e. hemorrhagic diarrhea and severe vomiting, you should consult a veterinarian urgently. Your puppy's chances of survival will depend on how quickly you react and how soon you get him under professional care.

Also note that severe diarrhea and vomiting, even when not due to PVC2, can lead to dehydration that can cause serious damage to your puppy's body, even death. Parvovirus or not, this type of symptoms should make you run to the vet as soon as possible.

What are the symptoms of Puppy Parvovirus?
Parvovirus in puppies is characterized by severe gastrointestinal distress, including diarrhea that is often bloody and severe vomiting.

Canine parvovirosis is an extremely dangerous and contagious disease, to which puppies are particularly susceptible. This pathology is, still today, very widespread in kennels and other places where the dog population is dense, and makes many victims in France every year.

To protect your puppy against this serious disease, it is important to have him properly vaccinated and to make sure that he comes from a serious breeding, where the other animals are vaccinated and live in decent hygienic conditions.