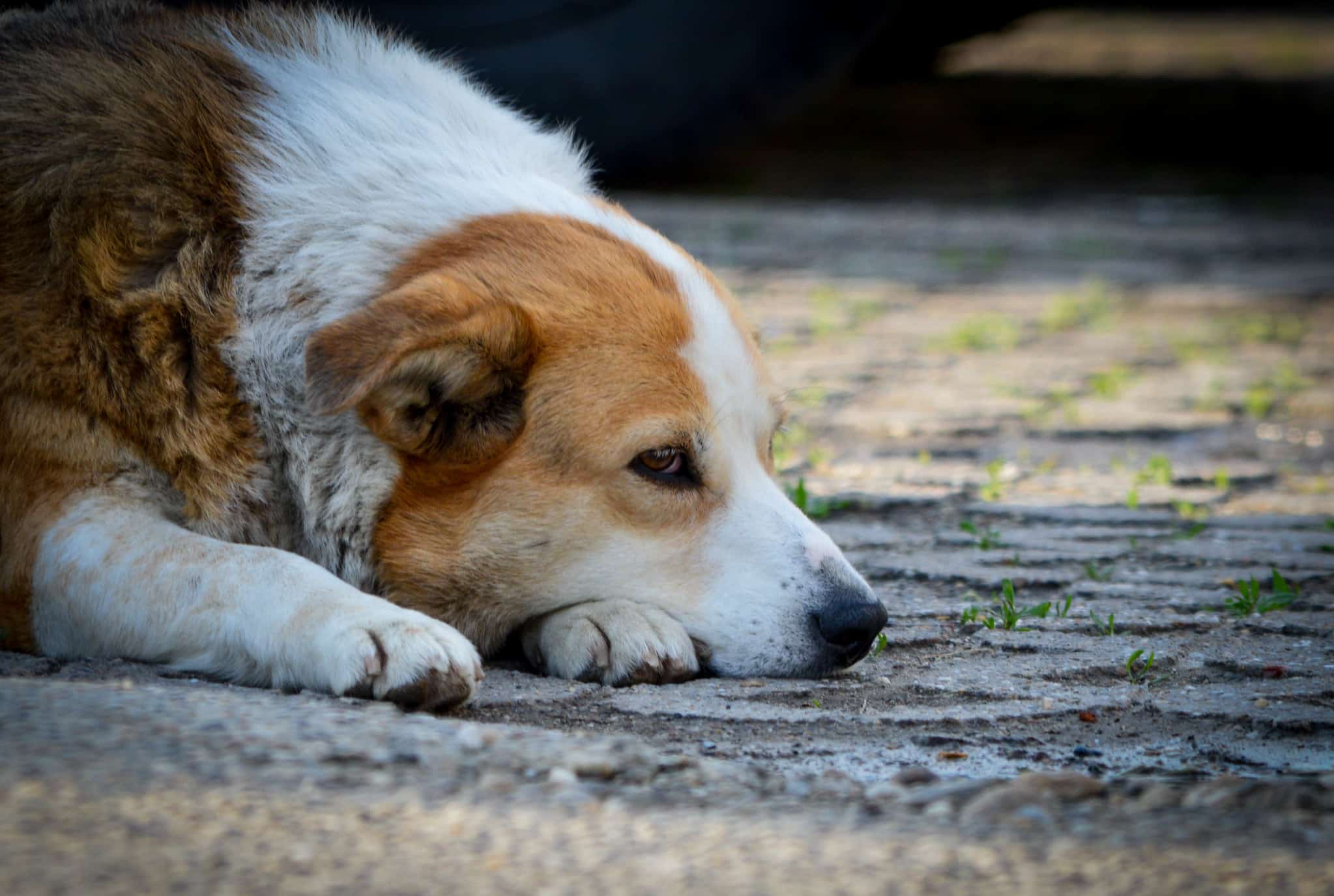 Leukemias are forms of blood cancers well known in humans, but still little studied in dogs.

There are many different types of leukemia, some of which are particularly difficult to diagnose and treat, while others do not require treatment. Today, I'd like to take a closer look at this disease that plagues the health of many dogs, sometimes without their owners even knowing it.

What is leukemia in dogs?

Leukemia is often referred to in the singular, but the truth is that there are many different types of leukemia, and not all have the same prognosis or require the same treatment. Leukemias are cancers that develop in the cells of the bone marrow, the organ responsible for the production of blood cells - hence the name blood cancer, when in fact it is a cancer of the bone marrow.

In dogs, it is estimated that between 7% and 24% of neoplasia (tumors) are caused by blood cancers (hematological malignancies). Leukemias are caused by the appearance of cancerous cells in the bone marrow, which disrupts the production of blood cells.

This results in an abnormal proliferation of abnormal and inoperative blasts (precursors of white blood cells), to the detriment of the production of red blood cells necessary for the oxygenation of cells. The platelets are also altered, which leads to coagulation and blood circulation problems.

A distinction is made between chronic leukemia and acute leukemia, the former appearing and progressing slowly, the latter, more fulminant, presenting a very poor prognosis. In the case of acute leukemias, the proliferation of blasts is very rapid and quickly impacts the health of the dog at a systemic level - all organs are impacted by poor blood production.

In chronic leukemias, the abnormal cells usually evolve over the long term, sometimes for months or years, and do not always require treatment.

Symptoms of leukemia in dogs

Typically, a dog with leukemia has an often severe anemia due to a decrease in the number of red blood cells in the blood, which is manifested by an exacerbated pallor that is most easily seen in the mucous membranes. Fatigue, shortness of breath and, sometimes, weight loss can be added to the list of symptoms of this disease.

As a result, leukemic dogs tend to be hemophilic, easily developing hematomas at the slightest shock and suffering from unexpected hemorrhages, most often visible on the most vascular sites of their bodies, namely the mucous membranes, and more particularly the gums. Petechiae (small purplish spots) may also form on the skin of the animal, due to small hemorrhages of the blood capillaries.

Non-specific symptoms may also occur, such as vomiting, diarrhea (potentially hemorrhagic) or fever, as well as bone and joint pain, sometimes resulting in unexplained dislocations due to weakened cartilage. Finally, the dog's lymph nodes may react to the presence of cancer cells, in which case they will become swollen and painful, forming small balls under the animal's skin.

Treatment and prognosis of leukemia in dogs

When we think of cancer, we often think of chemotherapy as a treatment, as is usual in humans. However, it must be emphasized that in dogs, chemotherapy is primarily palliative before curative. Therefore, it is not systematically aimed at curing the animal, but rather at prolonging its life.

Despite this sad reality, chemotherapy can significantly extend the life of a leukemic dog, sometimes over several years, while allowing him to maintain a good quality of life. By good quality of life, it should be understood that the dog will suffer less from his disease with chemotherapy than without, which does not take away the aggressiveness of the treatment and its side effects.

This type of treatment can be difficult for both the animal and its owners, and sometimes the dog's prognosis is even clouded by the side effects of the anti-cancer drugs. For some chronic leukemias, treatment is not always considered in the short term, and a period of observation and monitoring is often preferred, especially when the disease is discovered incidentally and does not cause symptoms.

Instead, treatment is initiated when the disease begins to impact the health of the dog, particularly with the onset of anemia.

Causes and prevention of leukemia in dogs

The causes of leukemia in dogs are not well understood. As in humans, cancers seem to be linked to factors that contribute to their development, although they also occur in individuals who have not been exposed to any of these factors. However, the occurrence of cancer in dogs follows the pattern of human cancers, i.e., this type of disease has been increasing significantly over the past decade, becoming the leading cause of death in American dogs.

Certain breeds seem to be predisposed to leukemia (Golden Retriever, Bernese Mountain Dog, etc.) with approximately 50% of individuals dying of cancer. Research is looking into the correlation between the increase in cancer deaths in dogs and humans, considering that the exposure of dogs to our modern environment (pollution, industrial food, etc.) could explain this phenomenon.

Other factors could also be involved, including the high inbreeding of many purebred dog lines. In particular, in the Bernese Mountain dog - unfortunately one of the kings of inbreeding - the occurrence of specific cancers (histiocytic sarcoma or lymphoma) can be observed, suggesting a genetic origin.

Another aspect to be taken into account is the increase in the longevity of dogs and the great care that most owners now take of them. In other words, dogs in the past would die from other diseases without good care and vaccinations, whereas today they are better cared for and only the most serious diseases are treated.

The best way to prevent leukemia is to provide your dog with a healthy lifestyle, just as good lifestyle habits reduce the risk of cancer in humans. It's also a good idea to look closely at a puppy's pedigree before adopting him, and especially at the health of his parents: cases of cancer, leukemia or not, in his ancestors should raise your concern.

What is leukemia in dogs?
Leukemia is a cancer of the spinal cord, also known as blood cancer, because the disease causes the spinal cord to produce inactive blood cells. It is often referred to as THE leukemia, but there are in fact a wide variety of different leukemias, not all of which have the same symptoms or prognosis.

Is leukemia in dogs fatal?
Leukemia can be fatal in dogs, especially in its acute forms, but there are also chronic forms with a good medium and long term prognosis.

How is leukemia treated in dogs?
Chemotherapy is the reference treatment for leukemia in dogs. Although it is a palliative treatment, it can extend the life of the animal by several years, under good conditions. Some forms of leukemia, especially the chronic forms, are not always treated, and the dog can sometimes live normally with its disease.

Does my dog have leukemia?
The diagnosis of leukemia is based on blood and cytological tests that only a veterinarian can perform. If your dog shows symptoms that suggest he has blood cancer, it is essential that you visit a veterinarian to confirm or deny this.

Note that many other diseases, both severe and mild, can cause symptoms similar to leukemia. Leukemia is a frightening word, especially since the discovery of this disease is often fortuitous, as the pathology is detected during routine tests in a perfectly healthy animal.

Fortunately, chronic forms of leukemia often offer an encouraging prognosis, even if the cancers have the particularity of being different in each individual, which does not allow to prejudge their evolution with great certainty. If your dog is suddenly down, out of breath, a little pale or less cheerful than usual, don't wait before taking him to the vet! The earlier the disease is diagnosed, the better the prognosis for your pet.