How to clean your dog's teeth 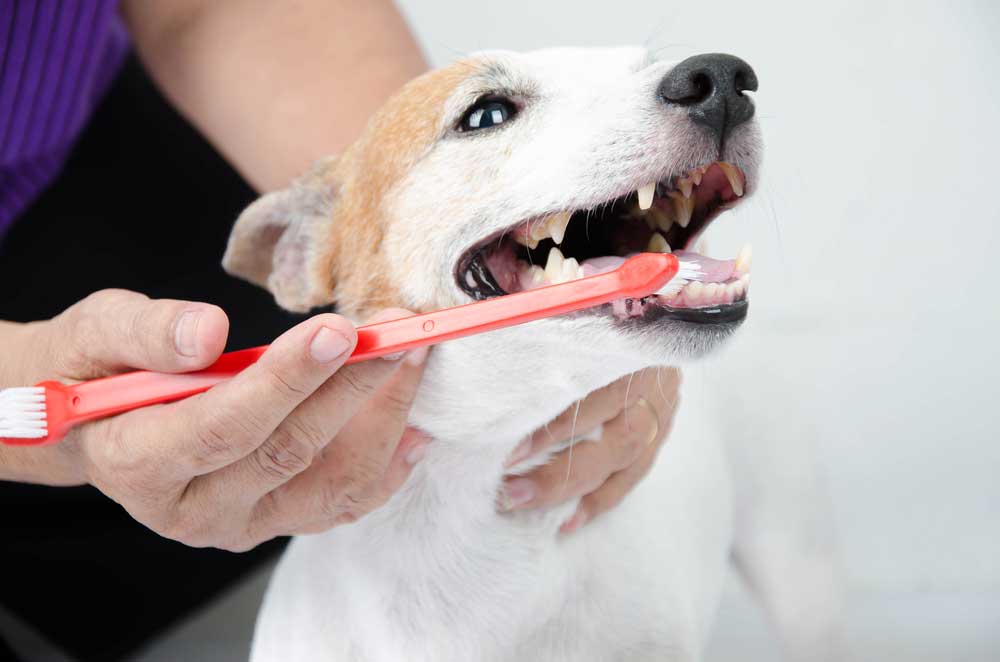 How to clean your dog's teeth

Cleaning your dog's teeth is essential to protect him from periodontal diseases that can have serious consequences on the health of his mouth and his body in general. The incidence of periodontal disease in dogs is so high that the pet industry has long been concerned with the problem.

Dental kibbles, chew sticks, toothbrushes, mouthwashes... The choice is such that it has become relatively complicated to find one's way through the vast array of solutions designed to help owners take care of their best furry friends' teeth. In this article, I propose to review the importance of maintaining your dog's teeth as well as the different ways to do it.

A dog's dentition is not quite the same as that of a human. Our pooches have 42 teeth, including 6 incisors, 2 canines and 8 premolars per jaw (upper and lower), as well as 4 molars on the upper jaw and 6 on the lower jaw. The fourth premolar in the dog's upper jaw and the first molar in its lower jaw are particularly well developed. These teeth are called "carnivorous" and are specifically adapted to the diet of carnivores.

Like humans, the dog is a diphyodontic animal, which first develops a first generation of milk teeth that it will lose between its 3rd and 5th week of life to allow for permanent teeth. In general, the dog's permanent teeth are well established when the animal reaches 6 months of age, or even a little later in large breed dogs.

A dog's teeth are covered with enamel, the hardest material the body can produce. Despite its remarkable strength, enamel does not repair itself if damaged - or only slightly. Underneath the enamel is dentin, another extremely strong substance, the second hardest produced by the body.

Dentin is innervated, unlike enamel. It can therefore cause pain to the dog when it is damaged and is able to repair itself when the teeth are injured (a bit like bones). Finally, under the dentin is the living tissue of the tooth, the pulp. The pulp is vascularized and innervated, so it is susceptible to transmitting infections to the rest of the body and causing intense pain.

Why clean your dog's teeth?

The maintenance of your dog's teeth is not only to keep them white and clean so that your companion has a beautiful smile and does not develop an abominable breath of jackal, it is above all a question of hygiene and, more than that, of health. Cleaning your dog's teeth keeps them healthy and prevents periodontal disease.

Periodontal diseases, which usually occur as a result of dental disease, are extremely common in dogs. It is estimated that it affects about two-thirds of the dog population of all ages and 80% of dogs over 5 years of age.

To fight against tartar
Cleaning your dog's teeth helps prevent tartar, the first step in the development of periodontal disease in dogs. Excessive tartar build-up causes bacteria to proliferate in the oral cavity, giving them the power to attack dental and periodontal tissue.

Tartar develops from plaque, a thin matrix of bacteria mixed with saliva. Over time, if nothing is done to destroy this small film, the plaque mineralizes and hardens, becoming tartar, which is extremely difficult to remove naturally.

Since tartar cannot be easily removed, unlike plaque, it will accumulate, harboring more and more bacteria which, in excess, represent a danger for the animal's oral health, and even for its organism at a systemic level. However, it should be noted that the amount of tartar in the dog's mouth does not necessarily indicate the health of the mouth.

To prevent gingivitis
When too much tartar accumulates in the dog's mouth, there is a major risk of gingivitis, an inflammation of the gums, the tissue that covers the alveolar bone housing the dog's teeth. Gingivitis in dogs results in bad breath (halitosis) which is obvious to the owner and usually leads to a visit to the veterinarian.

On closer examination of the dog's mouth, one can observe sites of inflammation, most frequently on the premolars. The gums are red, swollen, painful and sometimes purulent. In some dogs, gingivitis can take a chronic form, occurring in flare-ups that will plague the animal throughout its life. In this case, the attacks are often reduced and only concern a small portion of the tissues (approximately 10%). However, it is frequent to see gingivitis degenerate towards a periodontal disease of the deeper tissues, the periodontitis.

To reduce the risk of periodontitis
Periodontitis usually occurs as a complication of severe gingivitis. It results in a gingival bone recession or the formation of a periodontal pocket. If gingivitis is relatively well treated, periodontitis is much more difficult to treat and always leaves irreversible after-effects.

The recession of the gum, which retracts because of the infection, reveals the dental roots. The alveolar tissues also resorb, and the teeth can become loose or even fall out. Severe complications may occur, such as oronasal fistula or the dreaded periodontal abscess.

The evolution of periodontitis is chronic and cyclic, and consists of a succession of phases of sleep and destruction of the periodontium. In the most severe cases, the bacteria at the origin of the periodontal diseases of the dog can circulate in its blood and reach other organs of the animal, a phenomenon which can induce a mortal septicemia. 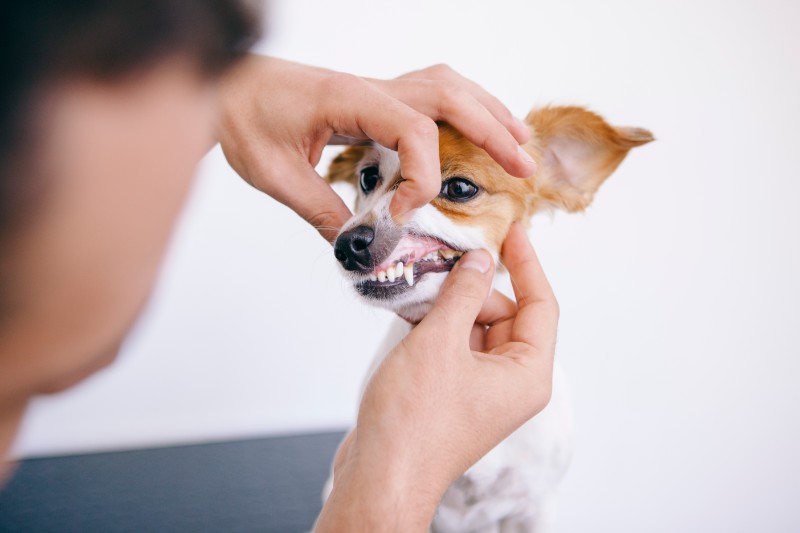 How to clean your dog's teeth?

As periodontal disease is a very frequent reason for consultation and a new source of concern for owners, the dog food market has taken up the subject and now offers multiple ways to take care of your dog's teeth.

Thanks to his diet
Almost all owners have heard that kibble helps to maintain good dental hygiene, while wet food (pâtés, terrines, home-made rations, etc.) does not. However, the basis for these claims is increasingly being debated, and more recent studies tend to show that there is no difference between wet and dry foods in preventing dental damage in dogs.

In fact, most dogs tend to gobble their kibble whole without chewing, which does not allow the kibble to perform its so-called abrasive action to remove plaque before it becomes tart. Dry foods also tend to damage teeth and create periodontal lesions when they are too hard, which could lead to periodontal disease.

In the end, when the results of different studies on the action of food on the elimination of dental plaque in dogs are compared, it appears that only kibbles rich in fiber and large enough to be chewed well could be effective. Secondly, it would also appear that the consumption of raw meat - which belongs to the category of wet food - also reduces the incidence of periodontal disease.

This mechanism would be linked to the composition of the meat, which is healthier than that of kibble, which would promote the maintenance of an oral flora less conducive to bacterial proliferation.

Thanks to chewing
Regular chewing has been proven to reduce tartar, and dogs with access to a chew toy or large bones to chew on generally have healthier teeth. However, the use of bones for dental maintenance in dogs is debatable, as they can cause other health problems, potentially more serious than gingivitis, especially if ingested by the dog.

If you are considering giving your dog a chew bone to maintain its teeth, it is important to choose it carefully: a portion of beef femur, solid and large enough not to be swallowed, is considered the best option. However, the dog is not safe from breaking his teeth on this very hard bone. A safer, but somewhat less effective, option is to use a safe chew toy or treats designed specifically for dental maintenance.

With a mouthwash
Rather than a real mouthwash, the products used to maintain the dog's dental hygiene are either liquids or powders that are poured into the dog's water bowl, or gels that are applied to the gums and teeth. These products are supposed to have an antibacterial action when in contact with your dog's saliva, which would allow to sanitize his oral cavity and to avoid the formation of dental plaque, and thus tartar. It should be noted that although many owners can no longer do without these products, there are currently no large-scale studies to measure their real benefits.

By brushing them
Brushing your dog's teeth can be a bit tricky, especially when the animal has not been used to it from a young age. However, it is currently the most effective solution to maintain good dental hygiene and avoid the formation of tartar that can lead to gingivitis and periodontitis.

To do this, you need a small toothbrush specifically designed for this purpose and a canine toothpaste - human toothpastes can be very toxic for dogs! The use of a canine toothpaste (with an attractive taste) is mainly intended to make the operation pleasant for your dog, because, in fact, the mechanical action of the toothbrush can be sufficient to remove the dental plaque.

Should I clean my dog's teeth?
It is recommended to clean your dog's teeth regularly, especially when your pet's diet does not allow him to remove plaque through chewing. Dogs that have large bones to chew and/or are fed raw meat are less likely to develop periodontal disease than others, so regular cleaning is not necessary. For all other dogs, including those fed kibble, daily cleaning is essential, either with a toothbrush or by offering chewable toys or treats.

Can you remove tartar from dogs naturally?
A study shows that regular chewing of a large bone can significantly reduce tartar on a dog's teeth due to the abrasive action of chewing. However, it is important to keep in mind that the use of bones to maintain the oral hygiene of dogs is not without risk. Dental fractures, in particular, are relatively frequent.

Does kibble clean a dog's teeth?
It has been said for a long time that kibble is more effective than wet food in maintaining a dog's teeth, but new studies tend to contradict this hypothesis. It seems that only certain kibbles, large enough to be chewed well and rich in fiber, could have an effective action against tartar, and this provided that the dog takes the trouble to chew them before swallowing them - which is rarely the case.

Moreover, it seems that dogs fed raw meat are relatively preserved from periodontal diseases, which tends to contradict the theory of the superiority of kibble over other diets in the context of oral hygiene. In nature, the health of the teeth of carnivores is a matter of life and death. If our domestic dogs are now less concerned by this pattern, it remains that a bad dentition can cause them serious health problems.

Fortunately, there are many ways to clean your dog's teeth. Some, such as daily brushing, take a bit of dedication, but others, such as handing out treats or chew toys, are particularly easy to implement.