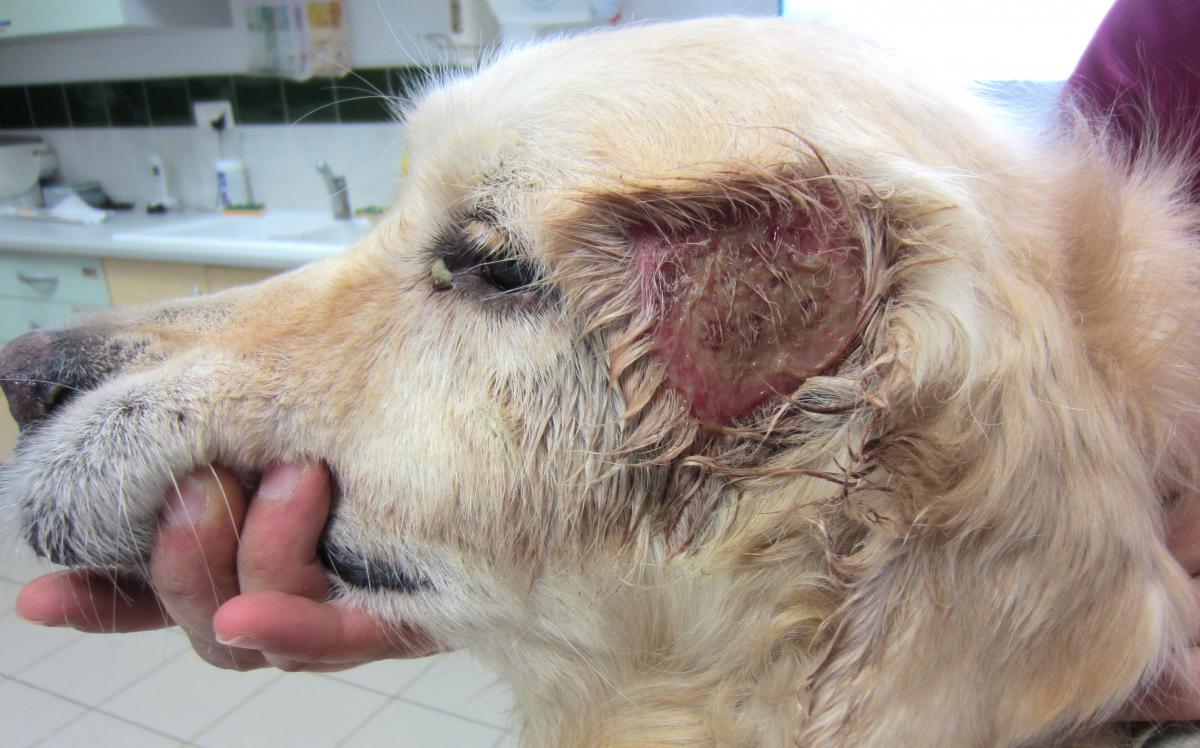 A hot-spot is a circumscribed, exudative dermatitis due to self-inflicted trauma.

It all starts with an itch or a pain that provokes scratching or licking: a small lesion is then formed, which can quickly take on very strong proportions under the effect of maceration under a thick coat, of superinfections, and/or of a racial predisposition.

These are often isolated accidents that will be treated on an ad hoc basis, but for dogs that have repeated hot spots, in particular, an underlying cause (atopy, parasitism...), should be sought.

The treatment consists above all in stopping maceration (shearing and cleaning of lesions) and self-inflicted trauma (collar). An antibiotic that diffuses well into the skin is often necessary, as well as an anti-inflammatory. If a predisposing factor has been identified, it will of course be eliminated - as far as possible!

WHAT IS A HOT SPOT?

A hot spot is a strong dermatitis (inflammation of the skin), circumscribed, (of limited size), humid, exudative, generally caused, (or aggravated, maintained), by traumas that the dog has inflicted on itself.

Well, to have a hot spot, you need a cause of itching, but you also need... a dog! And if dogs of all breeds can potentially develop a hot spot, some are more at risk than others. These are in particular:

- Labradors and golden retrievers, which are not only predisposed, but also often develop a particular form of hot spot: pyotraumatic furunculosis (see below), which is treated differently from other forms of hot spots.
- Dogs with long, dense hair and a thick undercoat, all of which favor maceration: German shepherds, St. Bernards, Newfoundlanders, Pyrenean mountain dogs, Bernese mountain dogs... and the aforementioned Labradors and Retrievers.
- Dogs predisposed to allergies, and in particular to atopy (where we find again German shepherds, labradors and retrievers).
- Poodles, for the hot spots of the cheek after grooming (we take the opportunity to specify that the quality of the grooming is not necessarily in question, it is a predisposition of the poodles to react to the least small irritation caused by the clippers or the scissors).

The role of bacteria (and staphylococci in particular) in the formation of hot spots is controversial. However, it seems that there are superficial pyotraumatic dermatitis, in which bacteria only colonize the surface of the lesion, and deeper dermatitis (folliculitis, furunculosis), in which staphylococci play a role. Young dogs, golden retrievers and Saint Bernards seem to be predisposed to the latter form of hot spots. 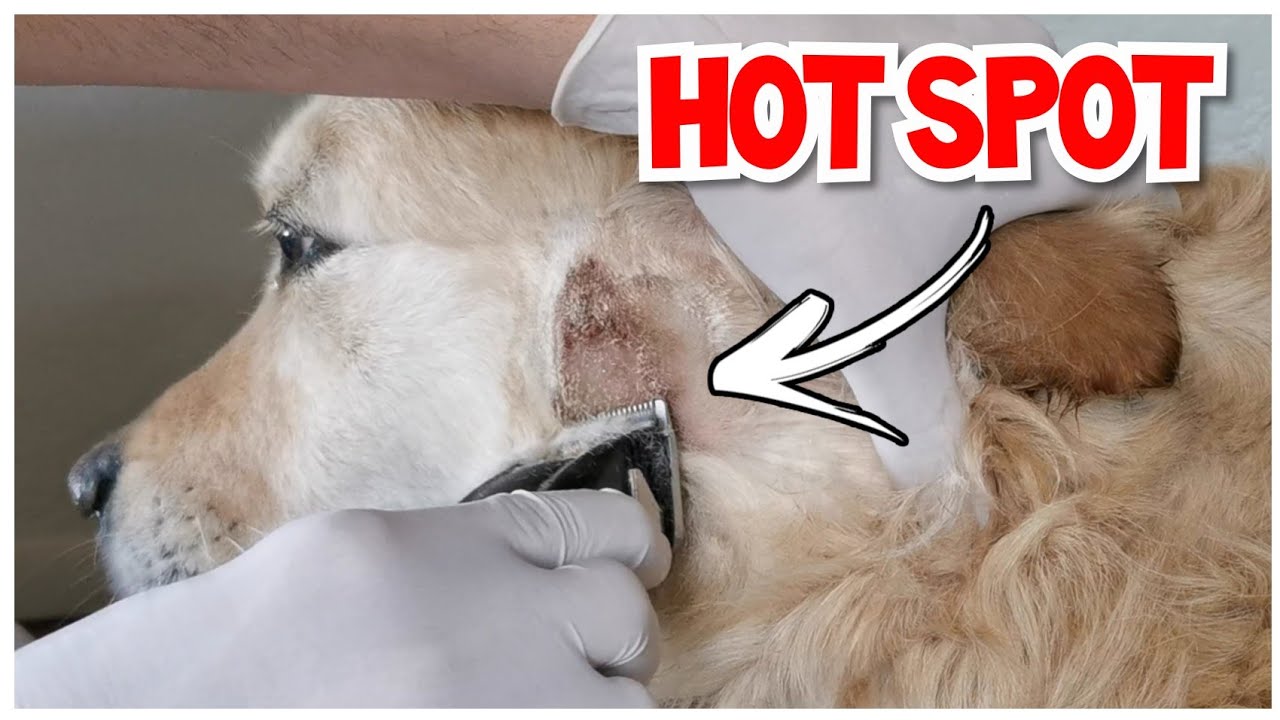 Well, it looks like a big red patch, oozing, sometimes crusty in its center, and often purulent, quite well delimited, on which the hairs have been pulled out... but with still a lot of hairs around, which come to stick on it, and all this macerates, and all this smells very bad. It itches horribly, and at the same time, it is very painful: the dogs do not stop licking themselves, or even biting themselves (if the plaque is, for example, on the thigh), or scratching themselves, (if the plaque is on the cheek). It is often difficult, if not impossible, to clean or simply touch the lesion without administering a sedative to calm the dog and reduce its pain.

Incredible but true, this huge lesion which takes half of the thigh of a Bernese Mountain Dog can appear in a few hours: you go to bed at night, there is nothing; you get up in the morning, and you discover this dreadful red patch of 20 cm in diameter, already eaten away in its center by the dog's nibbling (pictures below: hot spot on the thigh of a griffon, before and after shearing and cleaning)

Within the family of large oozing patches as described above, two categories can be distinguished:

- "simple" hot spots, or pyotraumatic folliculitis, large red patches with well-defined borders.
- And pyotraumatic furunculosis, where the large red patch is surrounded by small satellite papules or pustules. In the latter case, the bacteria do not only colonize the surface of the wound, but cross the superficial layers of the skin (epidermis) to reach the dermis and create deep pustules (furuncles). Labradors and Golden Retrievers (definitely!), are predisposed to this form of hot spot.

This distinction between folliculitis and pyotraumatic furunculosis is not only theoretical: as we will see later, it will be important in the treatment.

Cherry on the cake, if the dog is not very mobile and that we are in summer, the flies come to lay by there, and we find, there also in a few hours, with maggots which swarm in the middle of the lesion, and dig there happily their galleries.

HOW DO WE KNOW THAT IT IS THIS?

In general, the diagnosis does not pose too much of a problem: the appearance of the lesion, the speed of its appearance, the breed or the (bushy) coat of the dog, the season (usually hot), are enough to establish the diagnosis.

For cases that are suspected to be more complicated, or in dogs with repeated hot spots, a number of investigations can be performed:

- Skin layers to see where the bacteria are: eaten by white blood cells in the case of furunculosis (an example pictured here), or scattered around, in the case of folliculitis with simple bacterial colonization of the lesion.
- Skin scrapings to look for skin parasites (Demodex, sarcoptes...)
- Search for an atopic picture, and possible realization of skin-tests, etc. 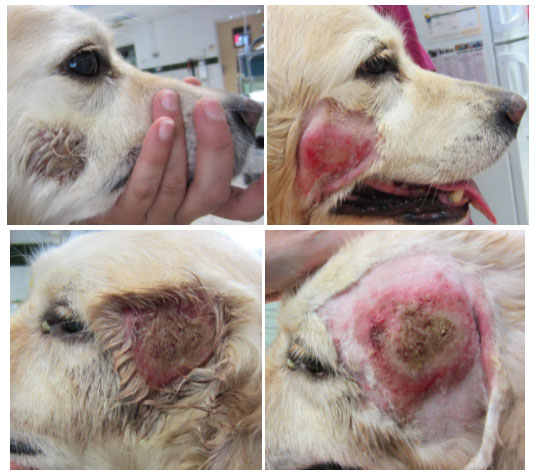 1 - Local treatments :
Whatever the triggering factor, the proportions taken by a hot-spot result from maceration, and self-inflicted wounds: therefore, we do what is necessary so that it does not macerate any more, and that the dog stops hurting itself!

In order for it not to macerate anymore, it is necessary to start by clearing the lesion of everything that can cover it: hair, pus, scabs... The area is therefore largely mowed: it is a good thing, as it usually happens in summer. Because of the pain, this operation must often be done under sedation, except in very nice and/or very stoic dogs.

Apart from stopping the maceration, the interest of the shearing will be to discover the exact extent of the damage, generally very underestimated when the lesion was covered with hair. It is also possible to observe the limits of the plaque, and to distinguish between a simple hot spot and a furunculosis, which will be important for the treatment by general way.

After shearing, clean and disinfect to remove pus and scabs. If the flies have laid eggs, the eggs must be removed, and if the eggs have already hatched... remove the maggots! This is done under general anesthesia, the maggots being taken out one by one from their galleries. It is obviously preferable to bring the dog to us before reaching this stage!

Once the plaque has been cleared and the dog has returned home, the lesion must be kept clean. And, just as important, away from flies. Treatment is continued with sprays or lotions to fight irritation, itching and infection.

2 - Systemic treatments :
Two families of drugs can be used by general route in case of hot spot: antibiotics, and corticoids.

Antibiotics are essential in case of furunculosis, and are then used for a long time. In the case of a simple and not too extensive hot spot, they are not needed if local treatment has a good chance of being sufficient. Antibiotics that diffuse well into the skin are preferred, and are usually active against staphylococci.

The use of corticosteroids is decided on a case-by-case basis, depending on the intensity of the inflammation, itching and pain. They are avoided as much as possible in cases of furunculosis.

We can also mention in the general treatments, the treatments of an underlying cause - if we have been able to identify one, and if the hot spots have a sufficiently recurrent character to justify such a search: desensitization in the case of atopy, acaricides in the case of sarcoptic mange or demodecia, etc. As with any dog, but especially in the case of a hot spot, it is recommended to permanently maintain a good prevention against external parasites (fleas, ticks and mosquitoes).

Well, don't panic: many dogs have one hot-spot in their lives, sometimes two, and then that's it. In this case, it is not necessary to implement a whole strategy: you treat the hot-spot as indicated above, and then that's it. However, if there is an obvious cause, we will of course try to eliminate it: if the dog is teeming with fleas, a regular anti-parasite treatment should be implemented. For dogs with a very dense and poorly maintained undercoat, regular grooming, or even a complete shearing at the beginning of the summer, should be considered; (we see some briards or bobtails completely sheared - except for the head - during the summer: this avoids macerations, spikelet problems, etc). For the poodles which systematically trigger a hot-spot of the cheek after the grooming, (once again, it is a question of an individual sensitivity of the dog, the quality of the grooming is not in question), a discussion with the groomer to avoid any irritation of this area, will generally make it possible to solve the problem.

For dogs that make three hot spots per year, the question is different, and an underlying cause should be sought. The course of action will then depend on a discussion with the dog's owners, in order to compare the advantages and disadvantages of, for example, identifying the cause of an allergy, followed by desensitization, with the punctual treatment of two or three hot-spots per year.