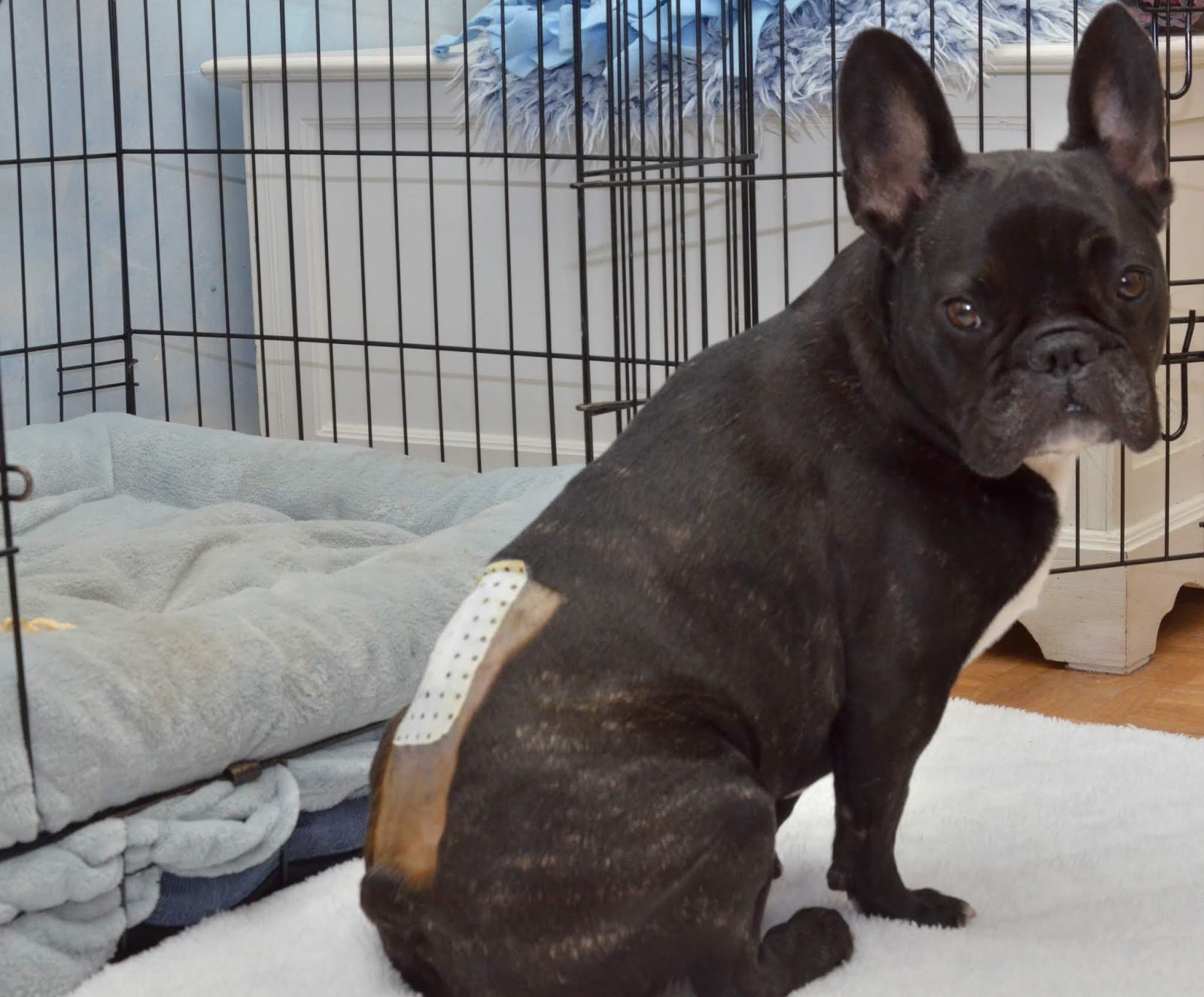 A herniated disc is a common condition affecting the dog's spine. It is very painful and can completely disable the animal, preventing it from moving its back legs normally.

Most common in small dogs, this condition can affect animals of any breed and age, causing great suffering. To find out how to recognize a herniated disc in dogs and how to deal with a dog showing signs of back pain, here's everything you need to know about this canine health condition, its causes, symptoms and treatment.

What is a herniated disc in dogs?

A herniated disc in a dog is a compression of the spinal cord that is abnormally pinched by a vertebral disc. The dog's spine is composed of 47 to 52 vertebrae (depending on the length of the tail) separated from each other by vertebral discs, composed of a gelatinous core and a ring of fibrous cartilage, which allows them to articulate to each other.

The spinal cord is a network of nerve fibers passing through the vertebrae along the spine. It transmits information from the brain to the muscles to trigger movement. There are three types of herniated discs resulting from different mechanisms, called type I (or Hansen I), type II (Hansen II) and type III (or Hansen III).

Although the differences between these three types may seem small, they do not have the same symptoms, prognosis, or causes, and do not generally affect the same canine profiles. Type I disc herniation is a rather acute form of the disorder. The fibrous ring of one of the spinal discs ruptures, and the gelatinous nucleus spreads out, compressing the spinal cord.

In a type II disc herniation, the annulus fibrosus gradually deforms and compresses the spinal cord itself. It is a chronic form, which progresses slowly. The herniated disc of type III occurs in case of trauma, when a brutal shock has damaged the disc ring.

Causes of herniated discs in dogs

Type I herniated discs are usually caused by premature degeneration of the spinal discs, most likely genetic in origin. The spinal discs deteriorate and lose their ability to absorb shock until the annulus suddenly ruptures, usually with a jump or a sudden movement.

Chondrodystrophic dogs, i.e. those suffering from cartilage defects generated during the breeding process to obtain those short-legged and bow-legged little dogs that their owners love so much, are more at risk. The Dachshund is the most affected, but also the Welsh Corgis, the Shih Tzu, the Lhasa Apso, the Miniature Poodle and the Beagle. Most of these animals develop this disorder between 3 and 6 years of age.

Type II herniated discs are more common in larger breeds at older ages (4 to 9 years). Labradors and German Shepherds are the most affected. In this case, there is a protrusion of the annulus fibrosus which deforms and moves slowly upwards, pinching the spinal cord in a typical dome-shaped deformation.

Finally, type III disc herniation is usually caused by an accident, a fall, or a shock that suddenly damages one or more disc rings. It is often accompanied by other lesions, vertebral or not, linked to the trauma. 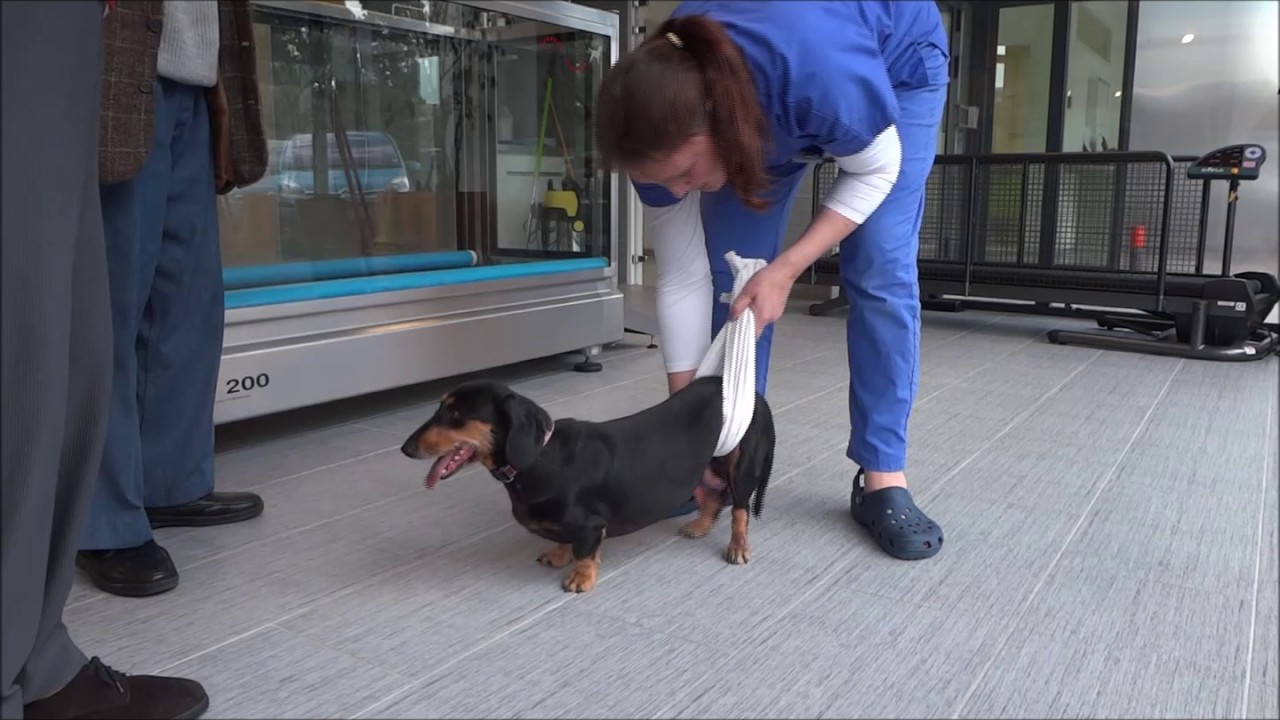 Symptoms of disc herniation in dogs

Pain is the first symptom of type I disc herniation, and it is sometimes possible to relate the sudden onset of pain to a movement made by the dog at the time of onset (jumping, false movement, etc.). The pain appears suddenly, and the dog may moan more or less sharply on the spot, then every time it moves, only during certain movements or permanently.

In the most severe cases, the dog may be affected by partial or total paralysis of one or both hind legs. Movement is then visibly hindered and, rather than a limp, the dog will tend to drag its back legs without being able to move them.

In type II herniated discs, the symptoms are more progressive and may be mistaken for osteoarthritis of the spine. The pain appears little by little, slowly becoming more and more annoying for the animal. Eventually, paralysis of the hind limbs may also occur.

The symptoms of type III herniated discs are similar to those of type I. Depending on the strength of the trauma, it is possible that the herniation is associated with other lesions which leaves no doubt as to its origin.

Treatment and prognosis of herniated discs in dogs

The definitive diagnosis of a herniated disc can only be made by a veterinarian who will then propose the most appropriate treatment according to the dog's health condition. It should be noted that other pathologies can present similar symptoms (cancerous or benign tumor, osteoarthritis, injury, etc.), so it is essential to prove a suspicion of disc herniation before considering treatment. An MRI is often indicated to diagnose this condition.

Once the diagnosis is made, there are two treatment options available to the dog: surgery, or medication. Surgery generally offers a very good prognosis for a return to an active normal life for the dog, with less risk of recurrence.

It is preferred when the dog has neurological symptoms (complete or partial paralysis of the limbs). If surgery is not an option (dog is too old or fragile), medication combined with complete rest can offer partial or even total recovery in about 50% of cases.

The dog will usually receive anti-inflammatory medication to reduce swelling of the damaged disc and decrease pressure on the spinal cord, as well as pain medication. Regardless of the treatment your dog may receive, it is essential that you seek urgent veterinary care if you suspect your dog has a herniated disc, especially a type I or III.

Indeed, the longer the compression of the animal's spinal cord lasts, the greater the risk of suffering irreversible after-effects, whether painful or functional (paralysis). Ultimately, the prognosis is good in a dog that is in pain but has no neurological signs. In animals with partial or total paralysis of the hind limbs, the prognosis remains positive if the animal can be operated on within 48 hours.

The best thing you can do to prevent your pet from suffering from this disorder is prevention, especially if it is a predisposed dog. In chondrodystrophic dogs, it is important to opt for a harness rather than a collar, which is more protective of the vertebrae.

These same dogs should avoid strenuous exercise, high jumps that may "pack" their spine and running down stairs. It is also important to try to keep the back of a dog prone to herniated discs flat when carrying him, and to do everything possible to keep him in shape.

Does my dog have a herniated disc?
A dog with a herniated disc often has a typical limp: his legs don't seem to work at all, he usually has little or no feeling in them, and he can no longer control them. A "classic" lameness, in which the dog puts less pressure on a leg and/or keeps it up to avoid putting it on the ground, is rarely a sign of a herniated disc.

A herniated disc in dogs is a painful condition for the animal, which should be treated quickly to avoid great suffering or possible long-term consequences. Fortunately, it is a treatable condition, although the spinal cord damage that can result from its compression cannot be treated.