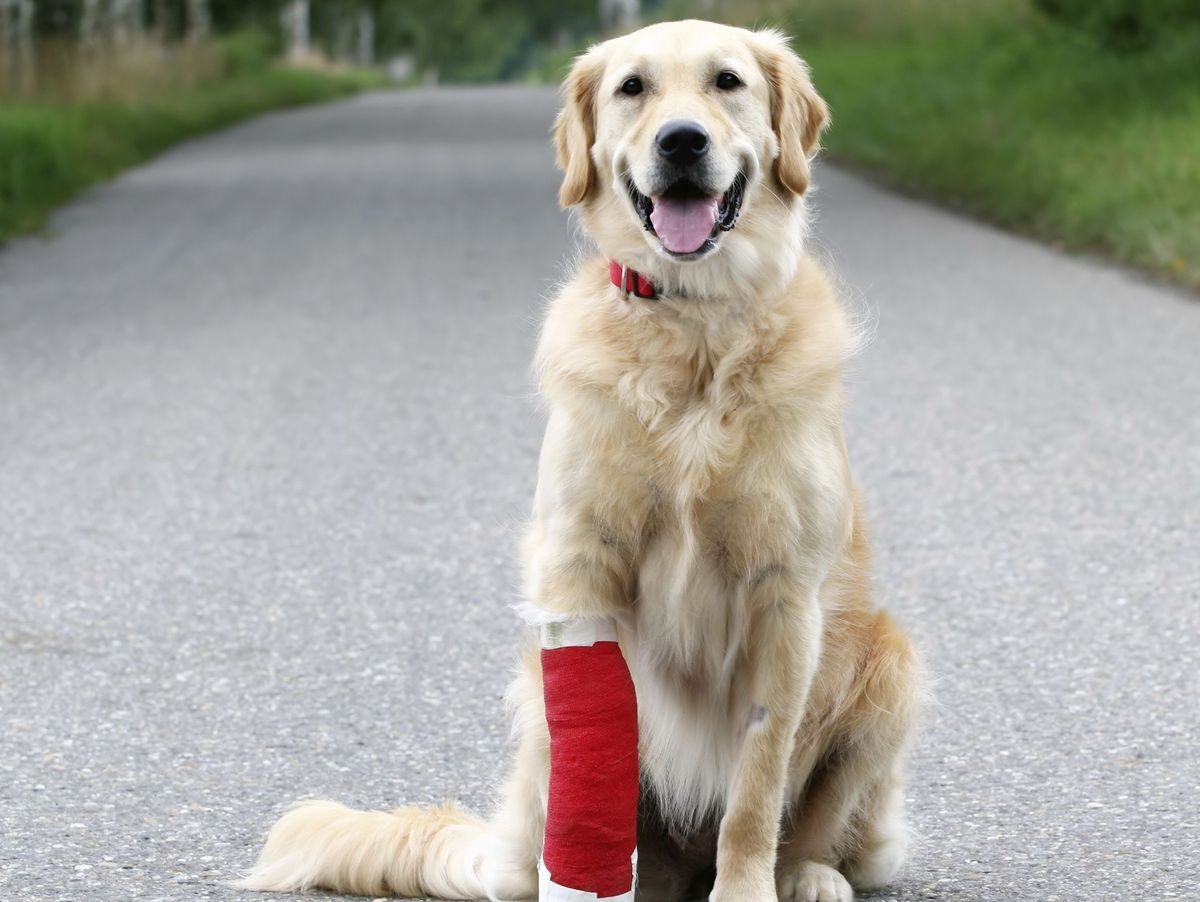 Fractures in dogs are a real veterinary emergency, because only a canine health professional will be able to take care of your dog's broken bones to allow him to heal.

In order to act correctly in case of a fracture and not to aggravate the situation, it is important to know how to recognize the symptoms and to know the right actions to take to help your dog. The prognosis of a fracture in a dog depends not only on the severity of the injury, but also on the way it was treated and cared for.

What is a fracture?

A fracture is a break in a bone, the most common being the tibia and femur, but fractures can also affect the skull, ribs, pelvis or any other bone in the animal. Since fractures are most often caused by different traumas (no two car accidents are alike), they are themselves always unique.

The injuries, bone damage, and surrounding tissue damage can therefore be quite different from one femur fracture to another, even if the trauma causing the two conditions is similar. Generally, the degree of severity of a fracture depends on the force of the impact and the bone involved, but it is also possible for a slight impact to cause a severe fracture, for example if the animal suffers from bone fragility.

Finally, a distinction can be made between simple and complex fractures, the former presenting a clean break in the bone, while the latter correspond to fragmented breaks. In the case of a violent shock, it is also possible that a skin wound is associated with the break of the bone and that the bone is visible outside the dog's body, this is called an open fracture.

What are the symptoms of a fracture in dogs?

Swelling, redness and bruising are often visible in the tissues surrounding a broken bone. In the case of an open fracture, you may see a wound that shows the broken bone, which may even protrude from the wound dramatically.

The dog will show signs of severe pain, as well as an unusual gait and/or limping, especially if the fracture involves a leg bone. The dog may cry out, remain prostrate or immobile, so as to move as little as possible in order not to awaken the pain of the injury.

Because of the pain and stress of the injury, he may have difficulty breathing, which will manifest itself in rapid panting, increased heart rate and rapid pulse.

What are the causes of a fracture in dogs?

Most often, a fracture occurs after a trauma: car accident, fall from a balcony, violent fight between dogs, hunting accident... More rarely, we can observe what is called a stress fracture, a condition that is found in particular in the racing greyhound.

This type of fracture occurs after a small but repeated trauma that triggers a sudden break in the bone, usually without warning signs. Finally, some fractures are pathological and can be caused by tumors or infections that weaken the bone, eventually leading to its rupture.

How to help a dog with a fracture?

The first thing to do is to immobilize your pet, in order to reduce its pain and to prevent the fracture from worsening by further displacement of the bone. To do this, first try to approach the injured dog gently and reassure him, then tie him up or lock him in a box or crate and take him to the emergency room.

Be careful not to get bitten: an injured dog is often unpredictable and aggressive, so don't overestimate the complicity you have with your doggie and consider it more like a wild animal. Be careful, wear gloves to protect yourself from bites and, if your dog seems too aggressive, put a muzzle on him for the time of the treatment.

If the fracture is in one of his legs, you can carefully wrap a thick cloth (blanket, towel) around it without compressing the wound, to prevent the animal from moving his leg. If you have the necessary equipment, you can also make a makeshift Robert Jones dressing to stabilize the limb and limit the swelling of the soft tissue.

Once this is done, it is imperative to take the animal to a veterinarian who will be able to manage the injury and study the extent of the damage. Indeed, a shock capable of causing a fracture is also likely to have caused other serious damage inside the animal's body.

In particular, the broken bone may have moved and perforated a nearby organ, as may be the case with the lung in a rib fracture. In addition, only a veterinarian will be able to treat a fracture, especially if the bone has shifted and needs to be reset.

Once your pet is back home, it should be put on complete rest until the injury heals completely. He will then have to undergo a period of rehabilitation, more or less long depending on the severity of the fracture and the bone affected. 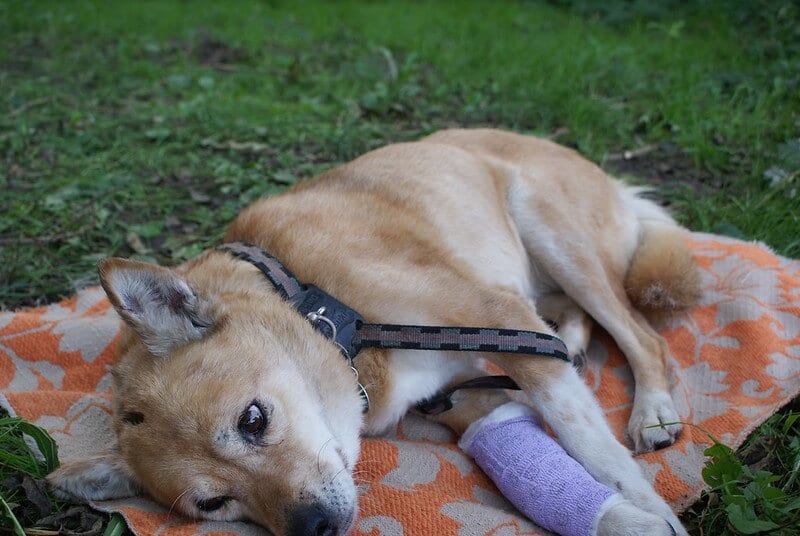 How do you make a Robert Jones bandage on a dog?

Knowing how to make a makeshift Robert Jones bandage to contain a simple fracture can be very helpful in reducing your dog's pain and immobilizing his paw so that the bone cannot move further. To do this, you'll need adhesive tape, cotton rolls and crepe tape - essentials that should always be in your canine first aid kit!

In case of an open fracture, don't hesitate to spray the wound generously with Betadine before going directly to a veterinarian: the Robert Jones bandage is not recommended in this case. Bone infections are extremely serious, and open fractures allow pathogens to easily reach your dog's bone marrow.

If your dog has a wound at the fracture site, start by making a bandage to prevent the wound from becoming infected by the cotton needed to make the bandage. If no wound is apparent, you can skip the dressing step and go straight to the cotton application.

Start by placing sterile compresses on the wound so that the lesions are completely covered. Then place a strip of crepe around the dog's broken leg to hold the pad(s) in place, starting at the dog's fingertips and working up to the hock (back leg) or elbow (front leg).

The crepe bandage should be placed loosely around the dog's paw to avoid cutting off its blood flow. The vascularization of the wound is indeed particularly important to allow a good healing and promote the healing of the limb: creating a tourniquet accidentally is therefore the last thing to do to help your pet!

With each new round, the pancake bandage should cover 50% of the surface area applied in the previous round. Once the bandage covers your dog's leg from top to bottom, simply cut off the remaining bandage and stick the end of the bandage on the bandage with an adhesive strip.

Then secure the bandage by placing adhesive strips at the top and bottom of the bandage, perpendicular to the crepe strip. The adhesive should never go all the way around the paw so as not to block circulation: place the strips from the top down, going from the dog's rump to his toes and extending a few inches beyond the crepe strip.

Once this is done, take the cotton roll and unroll it in the same way as the pancake strip, starting from your dog's fingers and working your way up to his elbow or hock, or even beyond. Unlike the crepe strip, make as many passes as necessary with the cotton to obtain a uniform thickness of 4 cm for a small dog and 8 cm for a large dog all along the broken leg.

The layer of cotton must be homogeneous and perfectly adapted to the morphology of the animal to contain the wound effectively. Finalize your improvised Robert Jones bandage by placing a new strip of crepe over the cotton to hold it in place by moderately compressing the wound.

My dog has a fracture, what should I do?
In the event of a fracture, the only thing to do is to take your pet to a veterinarian who has the skills and equipment to treat it. The veterinarian will also be able to perform various tests on your dog to make sure that there are no other injuries. The violence of a shock necessary to cause a fracture is indeed likely to have caused internal damage to your dog's body (internal bleeding, burst spleen, etc.).

How do I know if my dog's bone is fractured?
In the case of an open fracture, the lesions are apparent and it is therefore relatively easy to make a diagnosis. The simplest fractures are the most difficult to detect, but you can still observe signs of pain in the animal, lameness that is more or less severe depending on the type of fracture, swelling, redness and hematoma in the injured area, and even fever. Finally, the context is an important clue: if your dog has just suffered a brutal shock, a fracture must be suspected, even if there are no immediate symptoms.

What are the risks of a fracture in a dog?
An untreated fracture is likely to become infected, which can lead to gangrene or septicemia and death. In the case of a minor fracture, there is a greater risk that the bone will not repair itself properly, which can lead to lifelong pain and disability. When a fracture is properly managed and not associated with other injuries, the prognosis is good and recovery is often complete.

How do you help a dog with a fracture while waiting to take him to the veterinary emergency room?
While waiting for your dog to be treated, it is important to reassure him, immobilize him and try to reduce the fracture. If your dog is small, put him in a box or a transport crate adapted to his size.

Reassure him, and if the broken leg is not too painful, wrap it in a blanket or try to make a Robert Jones bandage. In dogs - as in humans - a fracture is a serious injury, which must be treated by a health professional to avoid complications or lifelong damage.

However, first aid by the owner can make a difference: the sooner a dog is immobilized, the wound disinfected and the injury contained, the easier the treatment will be.