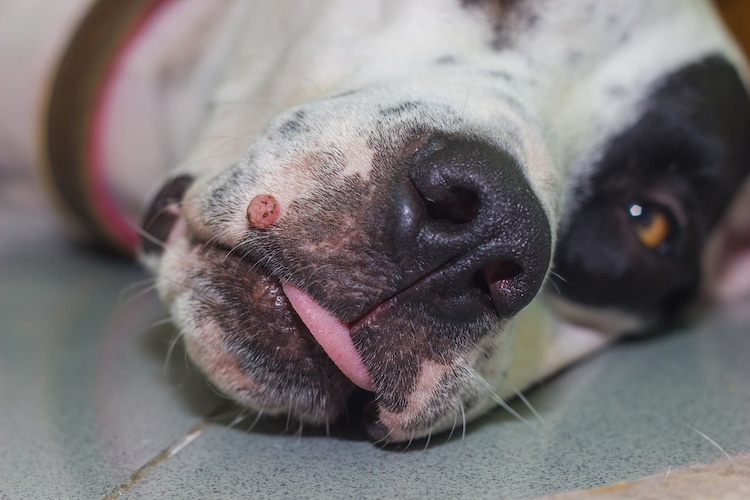 Dog warts are small benign tumors, often harmless, but their appearance is particularly unsightly and can put off many owners.

Although owners don't like to see these small unsightly lumps on their dogs, warts are generally not a health hazard for the dog and, as such, are rarely treated. To know everything about these benign tumors, their causes, their consequences and the cases in which it may be necessary to treat them, here is a small summary of what you need to know about warts in dogs.

What are dog warts?

A wart is a growth, a mass or a tumor, all words that mean that it is a protruding lesion that grows on the external tissues of the dog, namely the skin and the mucous membranes. Medically speaking, a wart is called a papilloma because this growth is caused by a papillomavirus, a kind of virus of which there are different types. The phenomenon of multiple warts is called Papillomatosis.

The warts are recognizable by their often bulging and irregular appearance, reminiscent of a cauliflower. However, there are also warts that are very smooth with little or no protrusion. These small protrusions are often pigmented, dark, pink or beige in color, often similar to the dog's skin tone - although not always.

It is important to distinguish warts in dogs from other tumors that may be malignant or reveal a different pathology. Squamous cell carcinoma, in particular, can be mistaken for a harmless wart. It is an aggressive skin cancer and should be suspected in large breed dogs with short coats and black skin, in whom it is most common.

Sebaceous adenomas, benign tumors of the sebaceous glands, may also suggest warts. Like warts, they are usually harmless, but unlike warts, they are not caused by a virus, and therefore do not indicate the immune health of the dog. Finally, it is important to note that all papillomas, benign warts of the dog, can develop into cancerous lesions, although this is fortunately rare.

Causes of warts in dogs

Dog warts are caused, as in humans, by infection with the papillomavirus, a type of DNA virus that is very common, and very resistant. It is estimated that all dogs will contract a papillomavirus in their lifetime, but few will develop symptoms - namely warts.

Indeed, papillomaviruses are very contagious and difficult to get rid of, as most of them are resistant to detergents and disinfectants. Dogs can transmit them either directly through oral contact or through contaminated surfaces on which the viruses can survive for days, despite thorough cleaning.

In short, canine papillomaviruses are everywhere, and almost every dog will come across them at some point. However, not every doggie gets warts - luckily for them! In fact, the health of a dog's immune system has everything to do with the appearance of warts on its skin or mucous membranes in the event of an HPV infection.

Therefore, warts are considered a good indicator of a dog's immune health: a dog with warts probably has an immune deficiency. A deficiency in the dog's immune system can therefore be considered as a cause of the appearance of warts, as well as the virus itself.

The weakness of the dog's immune system is not always pathological, and it is considered quite normal that the papillomavirus causes warts in a puppy or a young dog (up to 2 years). In these animals, the immune system is not yet completely mature, and can struggle to control and eliminate a papillomavirus, this last one causing eruptions of warts sometimes impressive.

In older dogs, the appearance of warts is not surprising either, as the immune system tires with age, like all other body functions. Also, dogs treated with corticosteroids, for allergies, for example, are more susceptible to HPV, as this type of medication decreases the immune response of their body.

Finally, some dogs are more prone to infections when they are stressed or tired. The animal's diet and lifestyle also play a considerable role in the health of its immune system. A previous illness, even a mild one, may have weakened the dog's immune system. More rarely, some dogs suffer from congenital or acquired diseases that cause a chronic dysfunction of their immune system, which can lead to the development of warts. 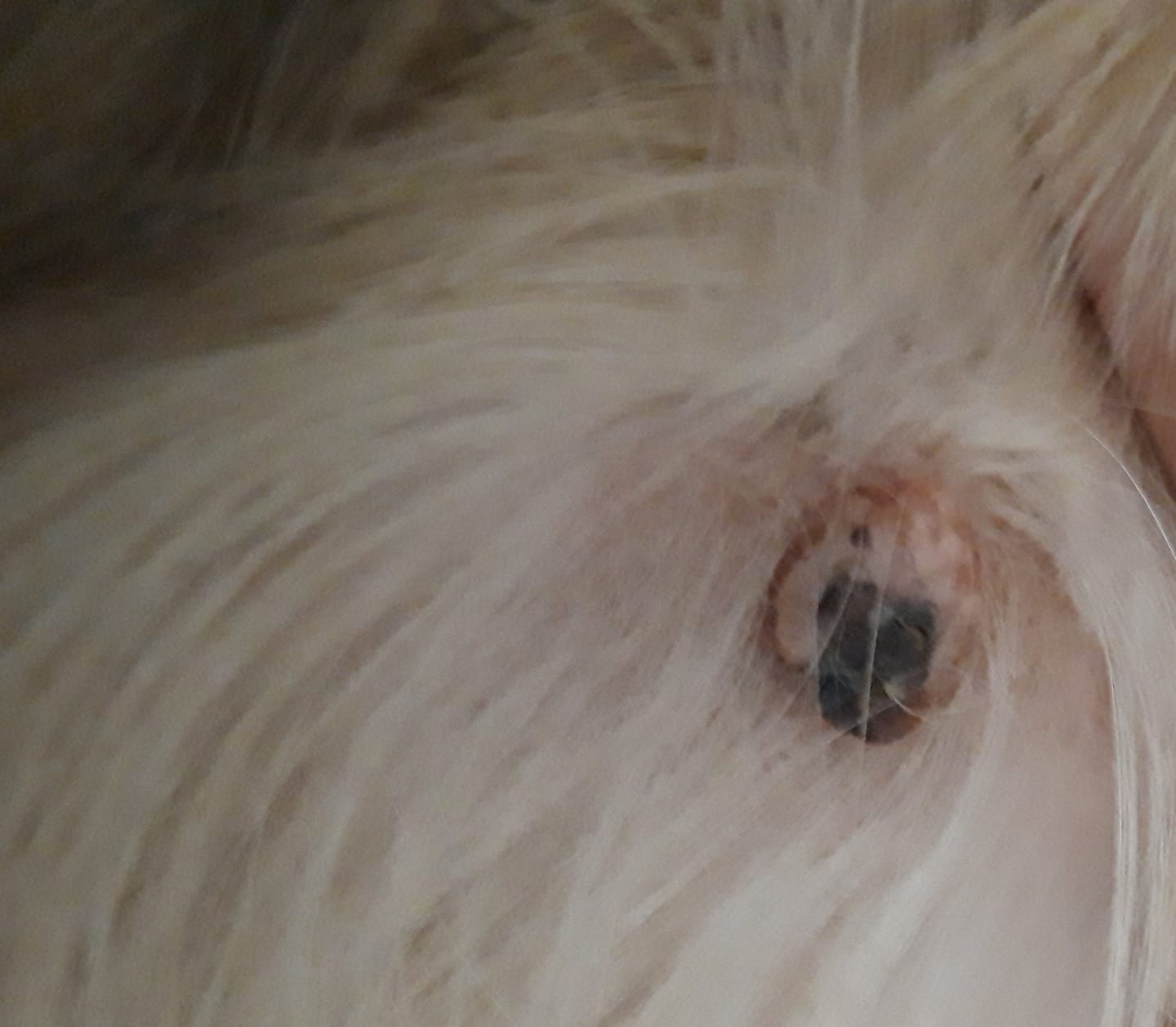 Symptoms and types of canine warts

There are different canine papillomaviruses (CPV), of which 8 are currently identified. These viruses differ mainly in the sites they infect.

Oral warts in dogs
Oral warts, caused by CPV1, are most commonly seen in dogs under 2 years of age and in immunocompromised dogs. Typically, the warts are very hyperplastic (raised) and develop in the mouth of the animal and, sometimes, on the ancillary skin tissues (lips, chin, etc.), but also on the deep tissues (esophagus and trachea). The eruptions are sometimes spectacular, with multiple lesions causing bad breath, bleeding, difficulty in eating and drinking and, if the trachea is affected, respiratory problems. Fortunately, serious infections are quite rare, the warts are usually confined to the animal's mouth, cause little pain and disappear on their own in 4 to 8 weeks.

Conjunctival warts in dogs
Always preferentially in young dogs, warts can colonize the conjunctiva, the tissue lining the inside of the eyelid and the outside of the eyeball. These warts are sometimes associated with oral lesions caused by oral papillomatosis. To a lesser extent, they also affect dogs over 7 years of age.

Cutaneous exophytic warts in dogs
In the older dog, a particular form of warts is seen, the cutaneous exophytic papilloma, which can affect any area of the body. The eruptions are less impressive than in the oral form, often with isolated or small warts that grow slowly. They rarely disappear, but do not bother the dog in most cases. This type of papillomatosis remains relatively rare, and preferentially affects Cocker Spaniel and Kerry Blue Terrier dogs.

Plaques of warts in dogs
Certain papillomaviruses (CPV3, 4, 5 and 7) provoke the appearance of very pigmented, multiple, often relatively smooth and not very prominent plaques. Rather rare, they are sometimes accompanied by other verrucous or nodular lesions. They can affect dogs of any age, and Carlins and Schnauzers seem to be more prone to this condition.

Inverted warts of the dog
Another less common form of warts, endophytic papillomas are lesions that grow inward into the dog's dermis. Similar to nodules and usually flesh-colored, they can be recognized by their crater, which forms a small depression 1 to 2 cm in diameter on the dog's skin. Typically, these lesions develop on the belly of the animal.

Treatment of Papillomatosis in dogs

In most cases, warts in dogs are not treated because they disappear on their own within a few weeks or months. If the warts cause functional problems, such as oral lesions that prevent the dog from eating or drinking, or tumors on the paw pads that impede movement, surgical removal may be considered.

Antibiotic treatment, still being tested in dogs, has shown encouraging results in making certain lesions regress more rapidly. It should be noted that there is no specific treatment to eliminate papillomavirus. Since warts appear when there is a deficiency in the immune system, certain treatments can stimulate the immune system to help the body fight the disease.

Are dog warts dangerous?
In the vast majority of cases, dog warts are not dangerous: they are benign tumors that eventually disappear on their own. However, some warts can become inflamed and infected if they are located on traumatic areas, such as the paw pads or mouth, or if the dog scratches them involuntarily. All warts can also develop into skin cancers, but this is very rare.

Can warts on dogs disappear?
Yes, warts always disappear on their own after a few months. Only warts on older dogs can remain for a long time and recur, but this is not very common. Although very unsightly, dog warts are generally not dangerous, and are even painless and well tolerated by most of our four-legged friends.

In some severe forms, however, they may need to be surgically removed to increase the animal's comfort and/or prevent them from becoming infected. In any case, it is always highly recommended to take your dog to the veterinarian if you notice one or more warts on his skin or mucous membranes.

The veterinarian will make sure that it is a benign tumor, and will decide if it is necessary to implement a treatment or if it is better to let nature take its course.