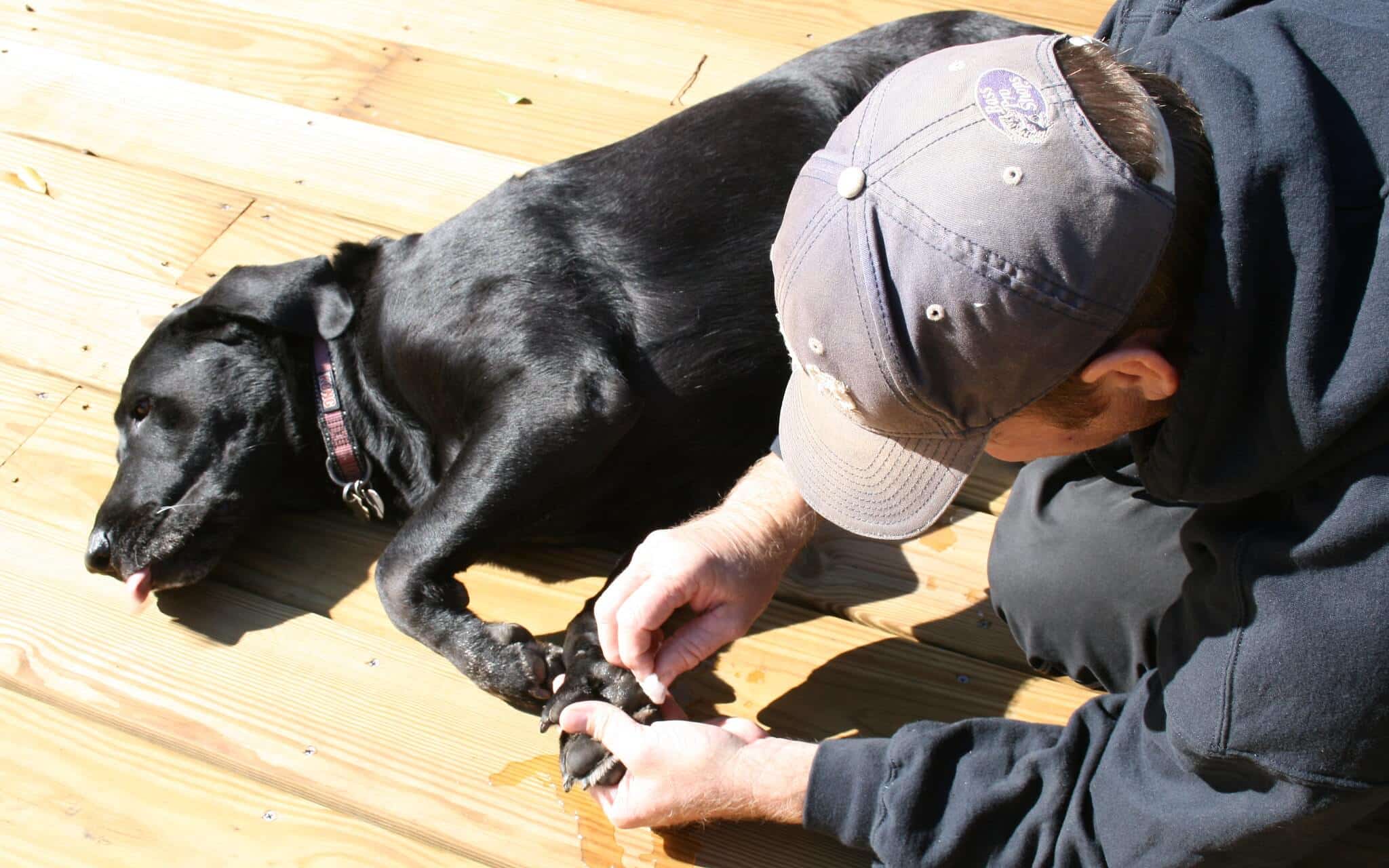 Abscesses are common lesions in dogs and can occur in a wide variety of situations.

Most abscesses are not serious for the health of the animal, but they still need to be properly managed to avoid complications. It is also important to know how to recognize an abscess with certainty, so as not to confuse it with a more serious condition such as a tumor.

What is an abscess in dogs?

An abscess is an accumulation of pus in one or more tissues of the dog's body. Any tissue can be involved, whether it is the animal's skin, muscles, mucous membranes or internal organs.

Abscesses are formed in reaction to an infection by pathogens (bacteria): they are not a disease in the strict sense of the word, but are the symptoms of a condition that generally originates outside the body. Abscesses, which are perfectly delimited and localized, should not be confused with phlegmons, which are diseases of infectious origin that spread on both sides of a lesion.

Two types of abscesses can be distinguished in dogs: superficial and deep abscesses.

Superficial abscess
The easiest to detect, as it is usually just on the dog's skin and takes the form of a simple lump. Unlike most tumors and cysts, the abscess is red, hot and painful for the animal, which often shows its distress through unusual behaviors.

The deep abscess
It is not visible to the naked eye and requires specific veterinary examinations to be detected (scanner or ultrasound).

What are the symptoms of an abscess in dogs?

Symptoms of an abscess in dogs vary depending on whether the lesion is superficial or deep. A superficial abscess will usually be easy to spot, as it forms a lump under the dog's skin that the owner can easily detect by palpation.

If it is of a significant size, it may even be possible to see a swelling under the dog's coat with the naked eye. Depending on its size, severity and the area affected, it can also cause discomfort in the animal's mobility.

For example, a dog with an abscess on its legs may limp, while it may refuse to eat if the abscess is in its mouth. The animal may also exhibit unusual behavior to show its suffering, such as drooping or compulsive licking of the affected area.

Sometimes an abscess is accompanied by a fever, so the dog may become dehydrated, depressed and listless. In the case of a deep abscess, it is not possible to observe the lesion because it is located under the dermis, in the deep tissues of the dog.

The owner will notice a deterioration in the general health of his four-legged friend, which is reflected in a change in behavior. The animal may show anorexia, fever, low spirits and adopt unusual analgesic postures to try to reduce its suffering.

It should also be noted that the appearance of an abscess can take only a few hours, and in the most advanced cases, it can break through spontaneously. It is then possible to observe a flow of pus, an opaque liquid giving off a strong and unpleasant odor

What causes an abscess?

Superficial abscesses are mainly caused by the superinfection of skin wounds that went unnoticed by the owner. Indeed, a very discreet and benign wound, such as a cat scratch or an insect bite, can be infected by bacteria and turn into an abscess, sometimes impressive despite its initial lack of seriousness.

This happens especially when the item that caused the wound was carrying bacteria - as is often the case with cat claws - or when the wound was soiled, for example after the dog rolled on the ground. Recurrent licking of a small wound can also lead to superinfection and the formation of a superficial abscess.

Finally, certain specific diseases may also cause superficial abscesses to develop on an episodic or chronic basis. This is, for example, the case of pododermatitis, an inflammatory condition located on the animal's paw.

This pathology, overrepresented in certain breeds of dogs, consists of hypersensitivity in the animal's paw, whose pads are damaged more quickly than they should be. Dogs with Pododermatitis often have sores on their paws, which quickly become complicated by bacterial infections resulting in abscesses.

Deep abscesses can also be caused by trauma, but are most often caused by disease. Thus, certain cancers, intestinal obstructions, chronic pancreatitis, or viral infections can be the cause of deep abscesses.

What are the consequences of an abscess?

If the problem is caused by a pathology, the prognosis of the animal will depend on the nature of the original disease. In the case of outbreaks due to cancer, parasite infestations or infectious diseases, the consequences will be more or less serious depending on the stage of evolution of the pathology.

However, the outcome depends on the origin of the abscess, which can only be treated as a symptom and not as a disease. For abscesses resulting from the infection of skin wounds of traumatic origin, the consequences are generally not very serious, provided that the lesion is treated correctly and in time.

In some cases, however, tissue necrosis may develop, requiring curettage, and there is also a risk that the infection may spread to the entire dog (sepsis). 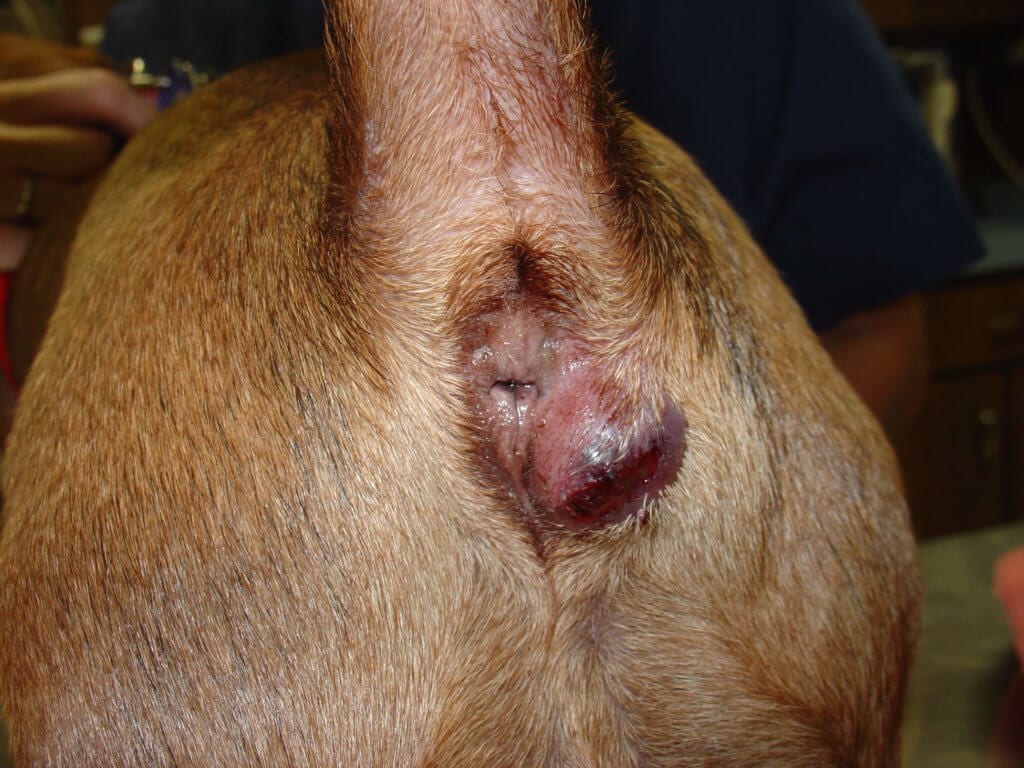 How do I treat my dog?

Only a veterinarian can treat an abscess in a dog: in this type of situation, you must go to a consultation without delay. In mild cases, an antibiotic treatment is usually enough to obtain a complete cure.

If it is old or important, a surgical intervention may be necessary to drain the pus, eliminate the bacteria present in the animal's body and, eventually, remove the necrotic tissues of the dog. In addition, a veterinary consultation is essential to confirm the presence of an abscess and to rule out other causes that could explain the presence of a lump on your dog's skin.

Your four-legged friend could have a more serious tumor or a simple cyst - usually harmless. If the abscess is minor, isolated and has already broken through, then you can try to treat your dog yourself, although seeking veterinary advice - at least by phone - is highly preferable.

The first step is to clear the affected area by shaving or trimming the pet's hair around the wound to get a good view of the extent of the lesion and to reduce the risk of superinfection. Abscesses are often quite deep cavities and should be rinsed thoroughly with a neutral fluid (e.g., saline) to remove all pus without causing the animal pain.

If the lesion does not appear healthy (free of pus) after 24 to 48 hours, take your pet to a veterinarian.

Never try to pierce an abscess by yourself: the care described above should only be applied to a lesion that has already naturally broken through! Remember to keep the lesion covered with a bandage, which protects the wound, but more importantly, slows down the healing process, as an abscess that closes while still containing bacteria is likely to refill with pus.

What causes an abscess in dogs?
Superficial abscesses in dogs are caused by the superinfection of a wound, sometimes serious, but generally minimal and, in fact, unnoticed by the owner. Deep abscesses, especially when they affect organs, are usually caused by infectious or inflammatory diseases.

What are the risks of an abscess in dogs?
An untreated abscess can become complicated, and there is a risk that the infection will spread into the animal's bloodstream and attack its internal organs.

What should I do if my dog has an abscess?
The only thing to do if you detect an abscess in your pet is to take him to a veterinarian, so that he can confirm the diagnosis and prescribe an appropriate treatment.

Can abscesses be prevented in dogs?
Regularly examining your pet's coat for any small wounds and disinfecting them immediately is an effective way to prevent them from becoming infected and developing into superficial abscesses. This is a common condition in dogs, but it is not a harmless symptom to be ignored.

Bacterial superinfections in any part of the body can always lead to sepsis, especially if the dog is fragile and has a compromised immune system. If your dog often goes for a walk in the woods or tends to fight with other pets in the household, I recommend that you regularly inspect his skin for small sores.

The most harmless lesions can indeed turn into abscesses that can be impressive, and it costs nothing to apply a little disinfectant on an insect bite or a cat scratch to prevent any complication.