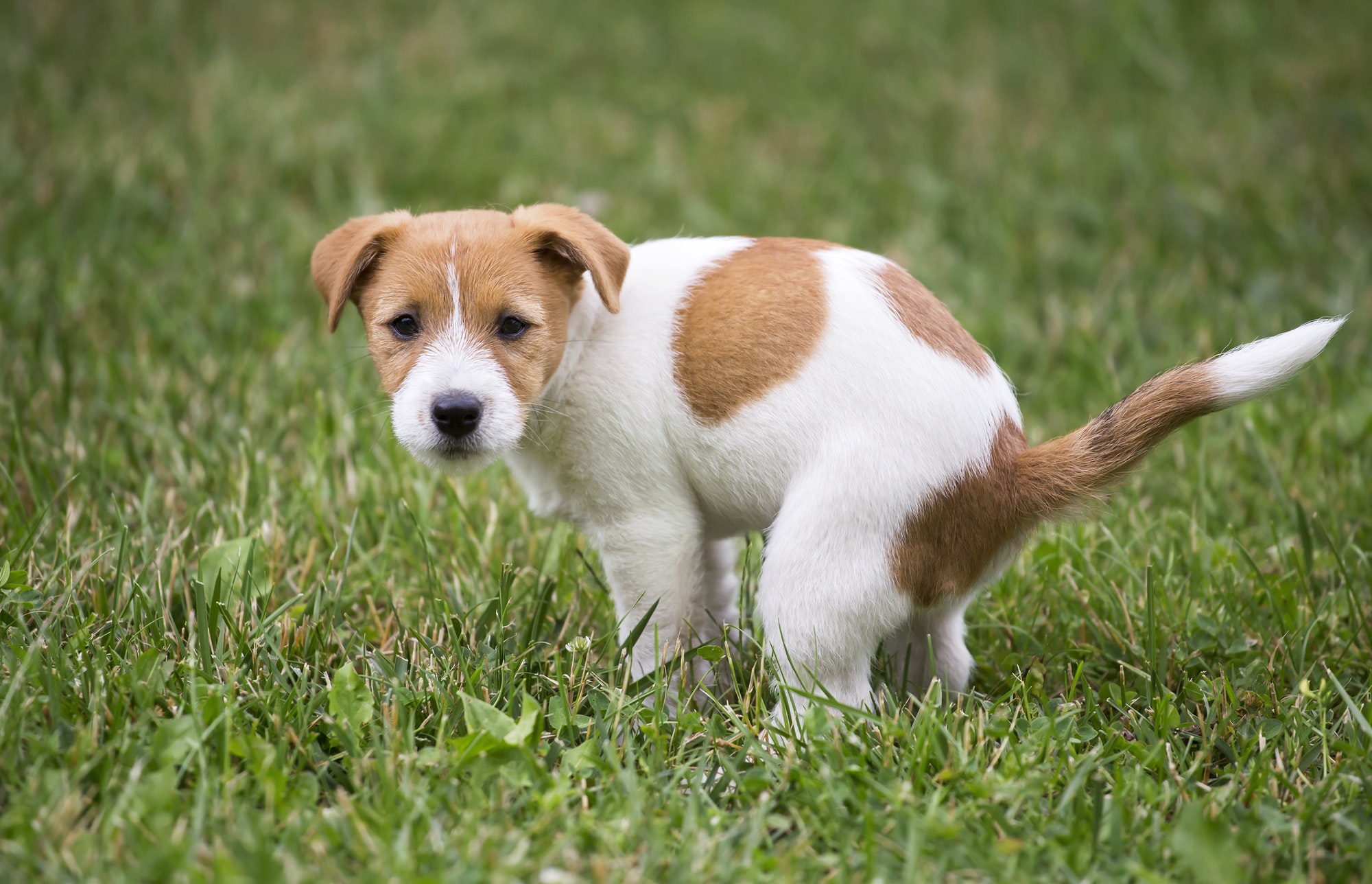 A constipated dog can be very inconvenienced by its small transit problem and, although it is quite rare, constipation that persists can lead to unfortunate health complications.

Moreover, constipation is not a disease, but a symptom. It therefore necessarily accompanies another underlying, potentially serious disorder. Today, I would like to give you a quick overview of constipation in dogs in order to discover the main causes, as well as the best way to react to your dog's transit problems.

What is constipation in dogs?

Constipation in dogs is a digestive system disorder that manifests itself by a decrease in the frequency of stool emissions, usually accompanied by an alteration in their appearance. When a dog is constipated, his stools will remain in his intestine for a longer period of time and will tend to become dehydrated during their prolonged stay. They are then harder, or even completely dry.

A constipated dog should not be confused with a dog that has nothing to evacuate, as is the case with animals that have undergone a surgical operation that required a period of fasting. These dogs may not pass stool for a few days after surgery while their intestines refill.

It should be noted, however, that some dogs may also have no bowel movement due to a serious injury or illness, potentially more severe than the one behind true constipation. Unlike those dogs that don't poop because they have an empty belly, a constipated pooch usually has a full bowel, and even tends to have a swollen, distended, hard and painful abdomen.

Abdominal pain can be translated by a despondency, the dog not daring to move for fear of suffering, or even by a lameness when certain movements harm his intestine. Apart from these general pains, it is also common to observe a typical discomfort or pain when the dog tries to relieve itself.

A constipated dog will tend to move into position to defecate, then push with all his might, often for a long time and with great difficulty, sometimes with a lot of crying and moaning. As a result of all his efforts, he may pass small amounts of hard, dry stool, but also disturbing substances such as mucus, blood or intestinal worms. His efforts may also fail, and your dog will not pass anything at all.

How do I know if my dog is constipated?

Constipation in dogs is not always severe, in which case it may go unnoticed if the owner does not take the time to watch his dog when he defecates - which is quite common, as the sight is not very pleasant. In fact, a constipated dog may simply have slight difficulty in passing stool, which can be noticed by the fact that it takes longer than usual to relieve itself, and that it pushes a little harder (it can sometimes be heard sighing discreetly as it strives to eliminate).

In severely constipated dogs, a hard, swollen and painful abdomen, unsuccessful elimination efforts, abnormal stool appearance and general poor health are more easily observed. For your information, a healthy dog eliminates 2 to 3 times a day, on average between 4 and 15 hours after eating. The operation takes place calmly, without effort, in a few seconds.

My dog is constipated, why?

A dog can be constipated for many reasons, and although not all of them are dangerous, it is essential not to neglect this condition in order not to put your dog's health at risk. While constipation itself is not a serious problem, it can lead to much more serious complications when it persists or overwhelms a fragile animal.

My dog is constipated because of intestinal worms
Almost all dogs are infested with intestinal parasites, even though owners like to think that their dog is safe from these unwanted critters. In fact, most dogs are very tolerant of intestinal worms and do not show any symptoms, which suggests that they are perfectly healthy and does not encourage owners to deworm them regularly.

In reality, it is very likely that your dog's intestines are teeming with roundworms, which can create a real blockage and cause constipation. Although rare, intestinal worms can also cause other more serious problems that can result in constipation, such as local inflammation or even intestinal intussusception.

My dog is constipated because of his lifestyle
Stress and a sedentary lifestyle are real scourges in dogs, capable of affecting their psychological well-being and causing physical symptoms, including our famous constipation. Physical exercise is essential to stimulate intestinal motility and allow the animal to maintain a healthy transit. In this respect, a sedentary lifestyle is the second most common cause of constipation in dogs.

Don't forget that even breeds that are known to be housebound (Lhasa Apso, Pekingese, French Bulldog, etc.) need exercise to stay healthy. Stress, which is closely linked to the dog's living conditions and sedentary lifestyle, also has a direct impact on the animal's intestinal transit and can manifest itself as acute or chronic constipation.

My dog is constipated because of his environment
Sometimes a dog may be constipated simply because he can't bring himself to relieve himself in an environment where he doesn't feel comfortable. A dog who voluntarily holds back until he finds a place he likes to eliminate may develop functional constipation.

If your dog's stool stays in the intestine longer than expected, it will naturally become dehydrated and dry, making it painful or impossible to pass. This disorder is often found in anxious dogs, but also in those who do not have sufficiently regular hygienic outings.

In this context, constipation can be part of a vicious circle: the more the dog hesitates to defecate for fear of suffering, the more its stools stagnate and dry out in its intestine, which complicates their evacuation and aggravates the constipation.

My dog is constipated because of an illness
Diseases of infectious, parasitic or metabolic origin can also result in constipation. In this case, there are usually concomitant symptoms (vomiting, fever, fatigue, tremors, etc.), although this is not systematic.

The main metabolic diseases involved in constipation in dogs are hormonal. Among them, hypothyroidism, diabetes and renal insufficiency can be suspected. Masses of the digestive tract, cancerous or not, can also impact intestinal transit. Infectious diseases, whether caused by viruses, bacteria or parasites, can cause inflammation of the intestine resulting in functional disorders that no longer allow food to find its way through (dilation, intussusception, etc.). 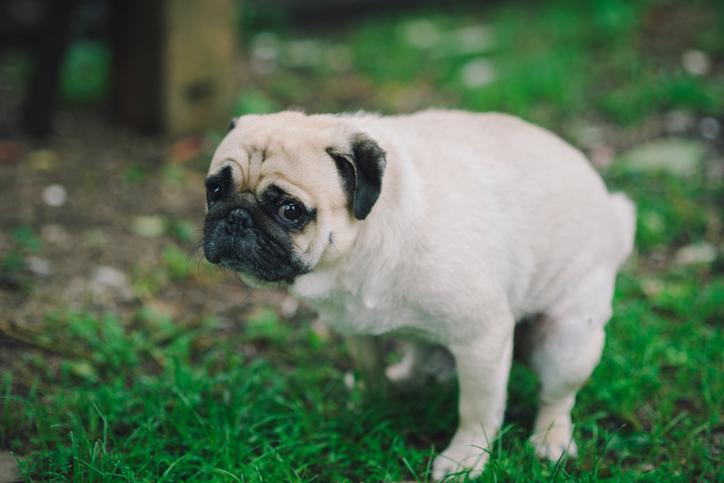 My dog is constipated, what should I do?

To act properly when faced with a constipated dog, it is necessary to assess the seriousness of the situation and to be cautious so as not to risk delaying the treatment by a veterinarian when the animal is potentially suffering from a serious disorder. It is indeed important to be aware that any disease offers a better prognosis when treated early, whether it is a small gastro, a cancer or a hypothyroidism.

However, since the most common causes of constipation in dogs are dietary or lifestyle related, it is still a good idea to investigate a little before panicking. If your dog seems to be in excellent health and is an adult in the prime of life, without any particular fragility, you can wait 48 hours before contacting a veterinarian.

During this time, it is absolutely essential to make sure that he drinks enough, even if it means serving him a bowl of water with a little chicken broth or milk to encourage him to hydrate. Indeed, constipation can be both a cause and a consequence of dehydration, a condition that can be very serious, even fatal.

However, be careful not to give your dog too much fluid at once to avoid the risk of stomach distention. Instead, give a palatable drink in small amounts several times a day. You can also add some fiber to his meals, ideally homemade or all-natural pumpkin puree, without additives.

Finally, it is recommended to walk your dog for a long time after each meal to activate its transit. If your dog presents other symptoms, digestive or not, or if it is a fragile, sick, old animal, a puppy or a pregnant bitch, it is highly recommended not to wait before contacting a veterinarian. Constipation can indeed become complicated quickly in fragile animals.

In particular, it can lead to the formation of fecal impaction, a plug of fecal matter that cannot be evacuated, which can cause lifelong sequelae (for example, a permanent dilation of the intestine) and even cause the death of a fragile animal.

What causes constipation in dogs?
The leading causes of constipation in dogs are diet and a sedentary lifestyle. Stress and behavioral problems are not far behind, followed by perianal area conditions, digestive disorders and systemic diseases. The best thing to do if your dog is suffering from constipation is to take him to a veterinarian, the only one who can reliably pinpoint the cause of your four-legged friend's ailments.

What can you give a constipated dog?
Never give human medication to a dog, and also avoid canine medications without a veterinarian's approval. When faced with a constipated adult dog that appears healthy, it is possible to add more water and fiber to the diet to improve transit. Natural pumpkin puree can be added to his food, and he can be encouraged to drink by mixing natural, unsalted milk or chicken broth into his water.

How to recognize constipation in dogs?
Normally, a dog defecates 2 to 3 times a day. If your dog is not following this schedule, he is probably constipated. His attitude can also be a red flag: a constipated dog may try to eliminate but not succeed, show signs of depression, and his abdomen may be hard, swollen and distended.

What should I do if my puppy is constipated?
Constipation can take on more serious proportions in puppies than in healthy adult dogs. In particular, it can be complicated by the formation of fecal impaction, which can cause irreversible intestinal damage.

As a general rule, any health problem involving a puppy should motivate you to contact a veterinarian quickly so as not to put your little companion at risk. A constipated dog is too often a pooch exposed to a lifestyle and environment that are not suited to his needs as an active carnivore.

Many owners tend to neglect their four-legged friends' need for physical exercise, especially those who turn to so-called "pet" breeds, which are known to be homebound.

No matter what your dog's breed standard says, all animals need physical activity to stay happy and healthy, whether it's a Poodle or a Doberman.