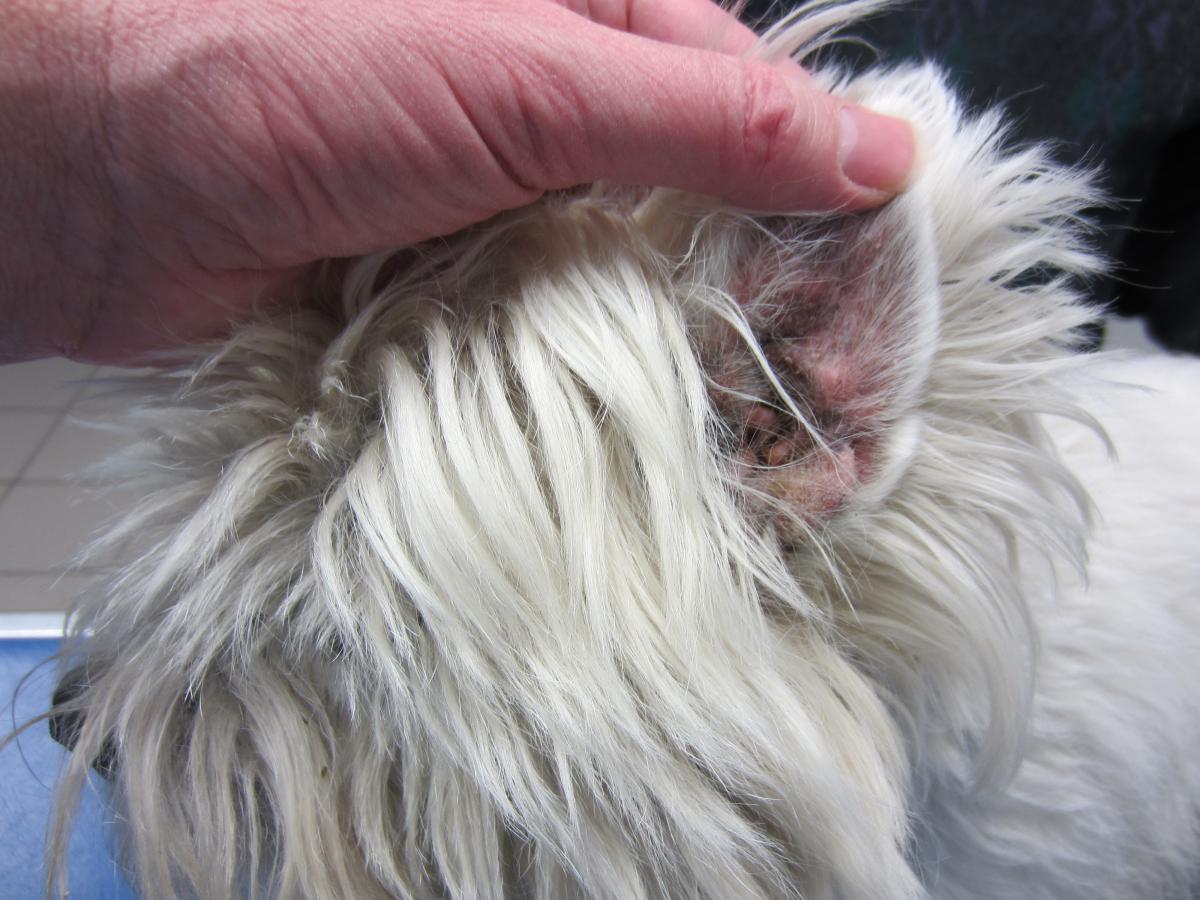 Atopy is a genetic predisposition to allergies, relatively frequent in dogs, which manifests itself by the appearance of skin inflammations.

Although this disease is not fatal for our four-legged friends, it can poison their daily lives with its sometimes virulent itching. In today's article, we explain the causes of this complex disease, its symptoms and the possible treatments to get rid of it and preserve your dog's health.

What is dog atopy?

Dog atopy is not a disease, but a condition characterized by a predisposition to the development of allergies to common pathogens.

Atopic dogs are therefore hypersensitive, i.e. likely to react to elements that do not cause any reaction in most of their fellow dogs. This hypersensitivity is immune in origin, with the dog's body overreacting to an allergen in an effort to protect itself.

The immune reaction then tends to degenerate, causing inflammation that is harmful to the dog's health and mainly affects the dermis. This is called canine atopy dermatitis.

Although a genetic aspect has been established and was for a long time considered as the origin of canine atopy, it is now accepted that this particular condition is the consequence of multiple correlated factors. In fact, we now speak of intrinsic factors, specific to the dog, and extrinsic factors, relating to its environment and skin microenvironment - the skin and coat of the dog being rich in microbiota. It is crucial to take into account the plurality of factors that can accumulate to cause an allergic reaction in an atopic dog in order to successfully treat it.

Genetic causes of canine atopy
The genetic predisposition involved in canine atopy is indisputable, and familial atopias are so clear that they have led to the deliberate selection of animals with this disorder in order to obtain entire lines of atopic dogs for scientific research. As a result, there are strong racial predispositions to canine atopy. In Europe, atopy is more prevalent in Shar Pei, Fox Terriers, Jack Russel, Labrador, Golden Retriever, Boxer, French and English Bulldog, American Staffordshire Bull terrier, Setters, Lhasa Apso, Shih Tsu and Cavalier King Charles.

In these dogs, it seems that the immune response is not entirely controlled by the same genes as in the rest of the canine population, resulting in an atypical reaction to allergens. In addition to the involvement of the dog's genes in an inappropriate immune response, atopic pooches also have an exacerbated skin fragility.

The hydrolipidic barrier, the film that lines the dog's skin and protects it from external aggression, is compromised. As a result, the dog's skin surface is not only more permeable to pathogens, but also more adherent, allowing infectious agents (such as staphylococci and Malassezia) to proliferate.

Environmental causes of atopy in dogs
A dog's genetic predisposition alone is not enough to cause an atopic allergic reaction without the intervention of environmental factors. The allergens that cause reactions in atopic dogs are called atopens. A distinction is made between aeroallergens, present in the air, and trophallergens, present in the food. Atopic dogs are usually sensitive to both aeroallergens and trophallergens, although sometimes only one atopen is involved.

Dust mites, pollen and, to a lesser extent, hair and dander from other animals or humans are all potential atopens. Food is said to be involved in nearly 30% of atopic allergies in dogs, and although it is not always the only allergen that is not well tolerated by the animal, avoidance diets in these cases often give very positive results. Atopic allergies must be distinguished from allergies to flea bites, a separate disorder. Nevertheless, flea bites can cause virulent reactions in atopic dogs, often in correlation with other symptoms.

Staphylococci, bacteria that proliferate on the skin of the atopic dog due to its compromised skin barrier, are widely implicated in atopic allergies. Their presence also tends to increase the virulence of the allergic reaction. Mycoses, such as Malassezia, are also often involved. While they do not necessarily trigger the dog's allergic reactions, they tend to aggravate the lesions caused by the body's inflammatory response.

It should be noted that these different elements are often involved together in an atopic allergy of the dog, some taking advantage of the lesions caused by the others to proliferate, aggravating the inflammations caused by the immune response of the body which reacts all the more, inscribing this phenomenon in a vicious circle difficult to break. In addition to allergens, stress could also trigger atopic reactions. A high prevalence of anxiety disorders has indeed been shown in atopic dogs, although they could also be a consequence of the dog's condition. 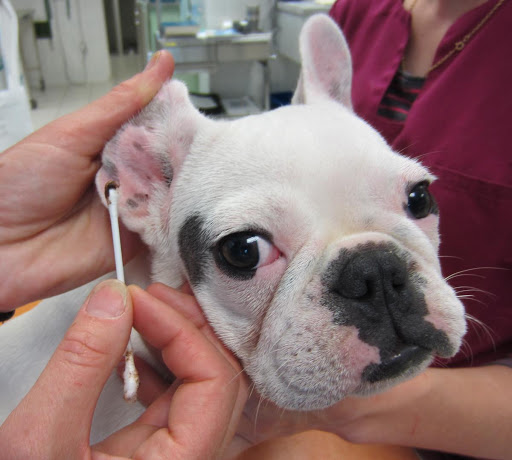 Symptoms of atopy in dogs

Dogs with atopy are predisposed to allergic reactions, which manifest themselves primarily as skin disorders. In fact, the disease most often linked to canine atopy is atopic dermatitis. Atopic dermatitis usually occurs in adult dogs between the ages of 1 and 6, although all animals can be affected. It can take several forms, classic, atypical and severe, which makes the diagnosis more complex.

In the classic form, itching (purit) is symptomatic of the disease. The dog licks, scratches or chews to try to relieve its discomfort. Often, lesions are located on the dog's head (ears, lips, eyelids), fingers and large folds (elbow, hock, groin, armpit, etc.).

The lesions are red, often dry, scaly and decorated with small non-purulent pimples (papules), and the coat is sometimes discolored from licking. If left untreated, alopecia may develop, accompanied by darkening (hypermelanosis) and thickening (lichenification) of the skin, as well as abrasions (excoriations).

In the severe form, the lesions described above generalize to the whole body. The itching is more violent, which can push the dog to mutilate itself by scratching. The general state of the dog tends to be altered, and the animal can be down, thin, lack of energy and change its behavior. The dog looks sad and shabby, as if it has aged.

Bacteria and/or fungi usually proliferate on the dog's skin, aggravating the itching and possibly causing superinfection in the case of primary abrasions or those related to scratching. Atypical forms of the disease generally correspond to very localized lesions, mainly on the ears (otitis), paws (pododermatitis) and udders (perimammary hyperkeratosis).

Atopic dermatitis causes little or no purit, especially in the early stages of its evolution. However, they may develop into a classic form and, more rarely, into a severe form.

Dog atopy cannot be cured, as it is impossible to remove a genetic predisposition in a dog. However, it is possible to desensitize the dog in the long term and, in the short term, to control the symptoms of the disease.

Treatment of the symptoms can reduce the itching that overwhelms the dog and causes him to scratch, which creates new lesions that can worsen his case. Antiseptic and/or antifungal lotions are often required to sanitize the dog's skin and prevent bacterial infections and fungal growth.

Oral antibiotics are sometimes prescribed in addition, depending on the dog's health and the severity of the lesions. Corticosteroids may also be prescribed on a daily basis to control the symptoms of atopic dermatitis, preferably until effective long-term therapy is implemented.

Several treatment options can be considered for the long term. Corticosteroids can be continued for life, but they weaken the dog's immune system and therefore make it particularly susceptible to pathogens, with potentially more severe consequences than atopic dermatitis. Immunophilins, proteins that block the body's immune response, can also achieve similar results to corticosteroids. However, the symptoms of dermatitis often return when treatment is stopped.

Antihistamines and some natural herbal remedies (Phytopica) work better than placebos, but are not effective enough to treat extensive lesions. The best way to get rid of atopic dermatitis in dogs is with allergy shots, also called desensitization.

This method involves exposing the dog to tiny doses of atogens on a regular basis until the dog's body eventually becomes accustomed to them and stops reacting. However, desensitization is still not widely practiced, as it requires a great deal of long-term involvement on the part of the owner.

The treatment lasts between 1 and 3 years, and any deviation from the protocol may require starting all over again. It goes without saying that an atopic dog must be treated against fleas, lice and ticks to minimize the risk of him triggering an allergic attack.

Ideally, his environment should be healthy, regularly cleaned to rid him of the dust mites that usually proliferate in our homes. Finally, a quality diet, determined after having proceeded to an eviction diet to find the ingredients best tolerated by the dog, is often very useful.

Which kibble to choose for an atopic dog?
In the case of an atopic dog, we try to banish the many ingredients that can cause an allergic attack. To do this, we opt for simple kibbles containing as few ingredients as possible, both artificial and natural, in order to minimize the number of potential allergens. Since proteins and artificial ingredients are often involved, it is preferable to choose natural kibbles containing only one source of animal protein. If the dog's condition does not improve, change the protein until you find the right one.

How is atopic dermatitis treated in dogs?
Treatment of atopic dermatitis focuses on two areas: short-term symptom control and long-term allergic reaction control. In the short term, care is aimed at preventing superinfections and calming the itching. In the long term, the dog should be desensitized to the allergens that cause his dermatitis.

How do I know if my dog is atopic?
Atopic dogs are predisposed to allergies, which manifest themselves mainly through skin disorders. An atopic dog will therefore present allergic flare-ups manifested by the chronic appearance of redness, pimples and skin itching.

How to prevent atopic dermatitis in dogs?
It is possible to prevent a dog's allergic flare-ups by taking care to keep him away from the potential allergens that cause his problems. Keep your dog's environment clean, use a no-food diet to get your dog's hands on the right food, and take great care of his skin health, including protecting him from parasites.

Dog atopy is not a fatality, and dogs with high sensitivity to atogens can usually overcome their allergies with sensitization therapy. Nevertheless, sensitization is a time-consuming and expensive treatment that is relatively burdensome for the owner.

In fact, many dogs are still deprived of this, and only receive treatment with corticosteroids - when they are treated.