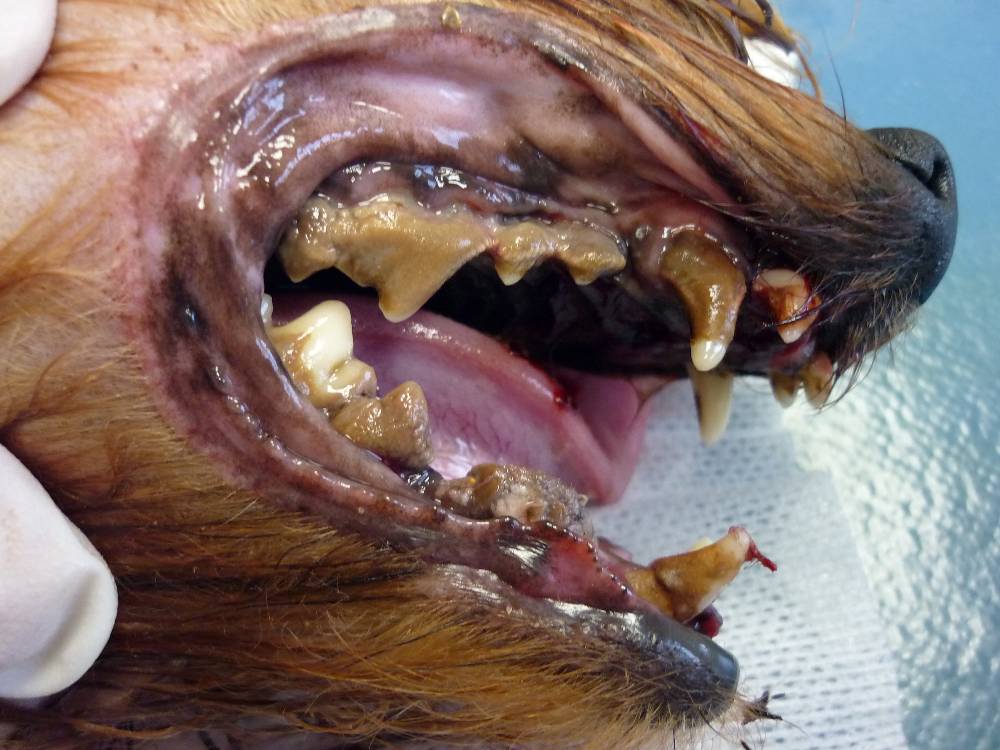 Periodontal disease is the most common infectious disease in pets, with a prevalence of nearly 80%; this prevalence increases with age and decreases with the size of the animal - it is much more common in small animals than in medium and large animals.

The periodontium includes the gum, cementum, alveolar ligament and alveolar bone, which are the supporting structures of the tooth. Periodontal disease is caused by dental plaque, and can be divided into two entities: gingivitis and periodontitis.

Gingivitis is a reversible inflammation of the gums, because once its cause (bacterial plaque) is eliminated, the inflammation recedes.

Periodontitis is an irreversible inflammatory disease of the non-gingival tissue (alveolar ligament, cementum and alveolar bone) and is evaluated by measuring the loss of periodontal attachment (loosening) of the tooth. Periodontitis can be inactive (quiescent), when there is no sign of gingival inflammation (if there is a loss of attachment of the tooth, it must be from before), or active, when tissue destruction is ongoing. Although periodontitis is classified as an "infectious" disease, and more than 700 bacterial species have been identified as capable of colonizing the biofilm of the subgingival sulcus, Koch's postulates* do not apply2.

Even untreated gingivitis does not necessarily lead to periodontitis; the development of periodontal disease is actually determined by an imbalance between the bacterial population and the host's immune system. Immune capacity, stress, age, nutritional and metabolic status, race, and dysendocrinias are all factors that can promote or prevent the progression of periodontal disease. If the disease progresses, bone destruction and apical migration of supporting connective tissue will lead to loosening and loss of one or more teeth.

Periodontal disease is a focal infection. This concept, introduced more than a century ago, describes a localized chronic disease, representing a source of microorganisms, toxins and bacterial and tissue degradation products, capable of reaching distant organs and tissues. The area of periodontitis has been measured in dwarf breeds and found to range from 3.18 to 29.8 cm24; thus, the area of affected tissue may represent a considerable proportion of the dog's total body surface.

During the development of periodontitis, bacteria in the periodontal pockets may reach the bloodstream, resulting in bacteremia, and although intercepted by the reticuloendothelial system in healthy individuals,5 prolonged continuous exposure to bacteremia may be associated with systemic disease involving distant organs and systems.

The systemic consequences of periodontal disease, however, are not limited to bacterial load. Inflammatory chemical mediators, bacterial endotoxins, and toxins from tissue breakdown may also be involved, either through direct adverse effects or indirectly by eliciting immune responses in organs distant from the oral cavity.

More than 50 studies have been published on the relationship between periodontal disease and cardiovascular disease (CVD) in humans, and most of them indicate a direct correlation between the two. For example, components of periodontopathogenic bacteria have been detected in atherosclerotic plaques, and two recent meta-analyses concluded that there is a significant correlation between periodontal disease and CVD.

The same is true in animals, where studies have also shown a positive correlation between the presence of periodontal disease and the observation of histopathological changes in the heart and other internal organs. However, international scientific opinion is not unanimous as to the importance of oral infections in the genesis of systemic diseases; indeed, there is currently no irrefutable proof of a direct link between periodontal disease and other diseases.

It has been shown that pregnant women with periodontitis are up to 7.5 times more likely to deliver a low birth weight baby prematurely. This risk is correlated with the increased production of pro-inflammatory cytokines triggered by circulating bacterial lipoproteins. In some cases, periodontopathogenic bacteria have been directly detected in the amniotic fluid.

Degeneration, hepatic steatosis, and intrahepatic abscesses have been described and associated with periodontitis in both humans and dogs.7 A recent publication observed that liver function parameters improved after periodontal treatment in humans, and that bacterial infection with Porphyromonas gingivalis may be a risk factor for development/progression of hepatic steatosis and steatohepatitis.

As the mechanisms linking oral diseases to systemic diseases are particularly difficult to identify, different hypotheses have been put forward to explain this link: direct infection, systemic inflammation with endothelial damage, and molecular mimicry between bacterial antigens and self-antigens.

Bacteria such as Streptococcus spp., Staphylococcus spp. and P. gingivalis and their breakdown products can cross the vascular barrier and enter the general circulation. Transient bacteremia has been demonstrated after chewing and brushing teeth and during dental prophylaxis and surgery; however, this bacteremia is usually not clinically significant in healthy subjects. However, it has been shown experimentally that P. gingivalis bacteremia leads to the development of atherosclerosis in susceptible pigs and mice. Several periodontal pathogens were then isolated, either directly or indirectly by PCR, from organs and tissues distant from the oral cavity. A recent study showed that P. gingivalis was present in 100% of atherosclerotic plaques in humans.

According to this hypothesis, periodontitis would cause an increase in circulating cytokines that could directly damage the endothelium of blood vessels, leading to the formation of lesions in the heart and other internal organs. It has been shown that proinflammatory cytokines such as TNF and IL-6 can induce anabolic myocyte mutations through the activation of intracellular signals, resulting in myocardial hypertrophy. Several studies have demonstrated elevated CRP levels in chronic periodontitis, while a recent study showed that in patients who underwent intensive periodontal treatment (scaling and root planing), the elasticity of the brachial artery 24 hours after treatment was significantly lower than in the control group. This was related to the increase in CRP and IL-6 levels during periodontal treatment. However, at 60 and 180 days after dental treatment, vascular elasticity was significantly increased in the treated group compared with the control group; this increase was attributed to the beneficial effects of periodontal treatment.

According to this hypothesis, the development of systemic disease is the consequence of an immune response induced by bacterial heat shock proteins (HSPs). All cells (including endothelial cells) that are subjected to any form of stress express HSPs, and bacterial HSPs add additional antigenic stimulation upon infection. The immune system is not always able to differentiate between bacterial and autologous HSPs, so that during infectious periodontitis there is activation of T cells and production of antibodies that can cause an autoimmune reaction to antigenically similar host tissues. In atherosclerosis, endothelial cells have been shown to express a human HSP called hHSP60; however, several periodontopathogenic bacterial species have also been found to produce their own HSP60, which is very similar to the autologous stress protein.

Bacterial HSPs induce the synthesis of specific antibodies that can attack host cells. Several studies have shown that periodontal infection may contribute to atherosclerosis and cardiovascular disease through cross-reaction mechanisms.

Usually, periodontal disease begins with few or no clinical signs, and the main reason for consultation for examination of the oral cavity is halitosis. Diagnosis cannot be based on visual examination of the oral cavity alone; it is essential to perform a periodontal examination with a probe and an intraoral radiograph under general anesthesia. There are different periodontal probes available, but all are designed to measure pocket depths and assess for gingival hyperplasia or recession. The probe is also used to assess the degree of tooth mobility and the presence of lesions at the root bifurcations/trifurcations. The probe is gently inserted into the gingival sulcus to assess ideally 4-6 points around the circumference of each tooth; apparently healthy teeth may have deep pockets on their palatal or lingual surfaces. All observations should be recorded in a dental chart to allow for an overall assessment.

Prevention and treatment of periodontal disease

The prevention of periodontal disease is the careful removal of bacterial plaque through brushing and good oral hygiene. Some industrial foods help reduce supragingival plaque, but the crucial point remains the removal of subgingival plaque. The goal is not to sterilize the oral cavity but to prevent the bacterial biofilm from changing from a mixed commensal population dominated by aerobic bacteria to a predominantly anaerobic population. The treatment of periodontal disease must be performed in the anesthetized and intubated animal; after detailed evaluation of the dental arches and analysis of intra-oral radiographs, supra- and sub-gingival scaling is performed, followed if necessary by more complex interventions such as tooth extraction or periodontal surgery.

Severe and extensive periodontal disease in an otherwise healthy animal cannot be treated with antibiotics in the long term; the proper treatment is to eliminate the cause by scaling (plaque, tartar) and any necessary extractions (advanced periodontitis). Antibiotics should be reserved for two types of situations: treatment of a local infection and prevention of bacteremia.

If periodontal disease has led to osteomyelitis of the maxilla or mandible, antibiotic therapy is recommended; it should be started a few days before surgery and continued for several weeks. Antibiotics a few days before surgery are also indicated for ulcerated gingival lesions (even if there is little plaque), chronic ulcerated paradental stomatitis in dogs, and stomatitis in cats.

Bacteremia is common in animals with active gingivitis and periodontitis, due to daily licking and chewing of food. In healthy animals, it is rapidly controlled by the activity of the reticuloendothelial system. When the animal has severe systemic disease such as heart disease, joint or eye prosthesis, splenectomy, or hypercorticism, and cellular metabolism is depressed by the systemic disease, the risk of distant tissue involvement warrants the use of antibiotics perioperatively. In these cases, the antibiotic of choice is a broad-spectrum bactericide that can be administered intravenously at induction of anesthesia and repeated if the operation lasts longer than two hours. It is also possible to administer a single oral dose on the morning of the operation.

There is currently no conclusive evidence of a direct link between periodontal disease and systemic effects, despite the various hypotheses put forward to explain this link. Nevertheless, there is considerable evidence to suggest that periodontal disease may promote and maintain inflammation in organs distant from the oral cavity, and that even in early periodontitis, the body may respond by synthesizing acute phase proteins, demonstrating the stimulation of systemic disease induced by inflammation of the oral cavity.

Periodontal health is not only important for the preservation of teeth. Periodontal disease can have a significant impact on overall health and may be responsible for morbidity and mortality, particularly in certain sensitive canine breeds. Preventive measures, such as oral hygiene, chew toys, and foods specifically designed to reduce the accumulation of bacterial plaque and tartar, should be considered in the management of periodontitis. Prepared foods for dental use are usually kibbles with a shape and structure that provides a mechanical abrasive action, but some products also contain sodium polyphosphate, a salivary calcium chelator, which slows down the mineralization of plaque and thus tartar formation. These foods can then be recommended as an adjunct to an overall plan to reduce periodontal disease.